Sean went on to play James Bond in seven movies and became an international celebrity. However, not wanting to get typecast, the actor took up other roles and has left behind an impressive body of work. 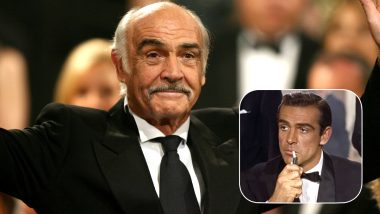 Could we hate 2020 any more? Well, the answer is yes. This tragic year has seen more than its fair share of loss in both the Hollywood and Bollywood industry. And the latest legend to leave this world is the original James Bond, actor Sean Connery. The 90-years-old actor breathed his last on October 31 and is believed to have died in his sleep. Sean made a mark so big with his role as James Bond, that he was always associated with the series even after a host of other well-known Hollywood faces took over the role. Sean Connery, First James Bond Actor, Dies at 90.

I grew up idolizing #SeanConnery. A legend on screen, and off. Rest In Peace. pic.twitter.com/OU9QEy5fTB

We’ve lost another legend today. After watching Highlander I hoped he’d remain immortal. He will live on through his immense work. #RIP Sean Connery. There will never be a better Bond than you. 🙏🏽

This man was really good to me. They say don’t meet your heroes. He exceeded all expectations. RIP Sean. #seanconnery pic.twitter.com/Ac0QCg7YYj

This is so heartbreaking...

Sir Sean Connery, one of my childhood favourite actors has passed away.

He was an amazing actor & amongst his many iconic roles, he was indeed, the best James Bond EVER!!

RIP Sir Sean Connery. The original 007. You were the epitome of grace. #SeanConnery pic.twitter.com/AgULZL6fQG

RIP Sir Sean Connery.. a trailblazer, a true legend and a gentleman https://t.co/hkLwouejZI

We are very sorry to hear of the death of British acting legend Sir Sean Connery. He was a BAFTA Fellow, a BAFTA Special Award recipient and won a Leading Actor BAFTA in 1988 for The Name Of The Rose. pic.twitter.com/LLBs1zKWCI

Sean went on to play James Bond in seven movies and became an international celebrity. However, not wanting to get typecast, the actor took up other roles and has left behind an impressive body of work. Sean Connery had achieved a Kennedy Center Honor for lifetime achievement in 1999 and was also knighted by Queen Elizabeth II in 2000. Also known as Sir Sean Connery, the actor's legacy will be cherished and he will be deeply missed. Condolences to his family!

(The above story first appeared on LatestLY on Oct 31, 2020 06:50 PM IST. For more news and updates on politics, world, sports, entertainment and lifestyle, log on to our website latestly.com).