Shark Week 2021: Forget Jaws, 7 Other Shark Movies You Totally Need To Check Out (and Where to Watch Them Online)

Ever since Steven Spielberg made Jaws back in 1975, sharks have become a sort of horror icon. It is that unknown factor of not knowing what lurks beneath the shadows that have made these creatures so scary. Although Jaws did change the perception of people on sharks, there is no denying that these are some magnificent creatures. 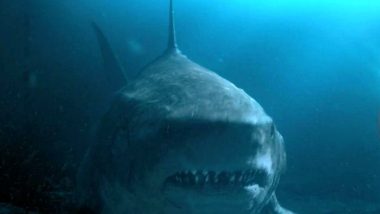 Ever since Steven Spielberg made Jaws back in 1975, sharks have become a sort of horror icon. It is that unknown factor of not knowing what lurks beneath the shadows that have made these creatures so scary. Although Jaws did change the perception of people on sharks, there is no denying that these are some magnificent creatures. Just seeing that shark fin pop up in a film can fill you with a sense of terror and dread. It helps with tension building and just lends itself to horror films. From Marvel Cinematic Universe to Fast & Furious, 7 Ongoing Hollywood Franchises With Maximum Number of Movies, Ranked!

While shark movies in recent times have become quite campy and silly, you can’t deny the fact that they are still enjoyable. There is just something about watching these creatures wreak havoc that doesn’t get old. Before The Conjuring – The Devil Made Me Do It Arrives, Ranking All the Conjuring Universe Movies From Worst to Best As per IMDb.

So with Shark Week upon us, we are taking a look at seven other movies aside from Jaws that you totally need to check out.

Blake Lively stars in this survival horror film where she plays the role of Nancy Adams, a surfer. In the film she is stranded far away from the shore and has to do her best to survive a shark attack. The filmmakers here opted for a CGI shark rather than an animatronic, and it looks pretty good. It has a simple plot, a tight runtime and some great thrills that will make your afternoon enjoyable. Available to watch on YouTube.

Open Water follows a couple as they go on a scuba diving trip. They find themselves stranded miles away from the shore in shark infested water when the crew of their boat accidentally leaves them behind. Open Water, reportedly based on a true story, is a gritty survival movie to watch, it’s the struggle of the couple that lends itself to the more intense moments of the movie. Available to watch on Amazon Prime.

Shark Night 3D follows a group of college friends who pack their bags to go on a trip together. Arriving at the lake house, the horror starts when their friend Mike’s hand gets ripped off by a shark. So begins their fight for survival. It has all the horror tropes that you would come to expect from horror films, but it’s the joy of watching a shark, or rather many sharks, just raise hell on screen which is so fun. Available to watch on Amazon Prime.

Talking about campy and downright dumb shark films, you have to take Sharknado into consideration. It combines sharks and tornados, that’s right, SHARK AND TORNADOS. It’s one of the dumbest things that I have ever watched and it was some of the best 87 minutes I have ever enjoyed watching a movie. If you just want to turn off your mind and enjoy a movie, then Sharknado is for you. Available to stream on Amazon Prime.

Sequel to 47 Meters Down, 47 Meters Down: Uncaged follows four teenage girls exploring a submerged Mayan city. Their exploration quickly turns into a battle for survival when they learn that the submerged city is actually a feeding ground for a Great White Shark. It does everything a sequel should, which is be bigger, bolder and more teeth. Available to watch on Amazon Prime.

Jason Statham takes on a Megalodon! If that doesn’t fill you up with excitement then I don’t know what will. It’s the absolute absurdity of The Meg that makes it so fun to watch. It has everything you would expect from a shark film and more. It’s a great way to just kick back and enjoy this movie because The Meg never really takes itself too seriously and is a perfectly fun watch. Available to stream on Amazon Prime.

Aside from Jaws, Deep Blue Sea is probably the second most known Shark film. It features some highly intelligent sharks that are let loose in an underwater facility. It has some great scares and all the shark action you would expect from a film like this. The sharks have a great blend of animatronics and CGI to them, and while the visuals can be a bit wonky at times, it never really loses your attention. Also features one of the most enjoyable death scenes in cinema, courtesy Samuel L Jackson. Available to watch on Netflix.

(The above story first appeared on LatestLY on Jul 13, 2021 04:46 PM IST. For more news and updates on politics, world, sports, entertainment and lifestyle, log on to our website latestly.com).