Sonic the Hedgehog 2 Movie Review: Ben Schwartz and Jim Carrey’s Much Improved Sequel is A Worthy Adaptation of Its Source Material! (LatestLY Exclusive)

Sonic the Hedgehog 2 is an upcoming film directed by Jeff Fowler and based on the Sonic videogames. It stars Ben Schwartz, Jim Carrey, Idris Elba, Colleen O’Shaughnessey and James Marsden. It releases in theatres on April 22, 2022. 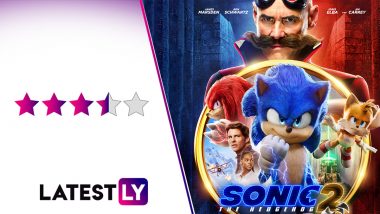 Sonic the Hedgehog 2 Movie Review: It’s honestly astonishing to see how the Sonic franchise, at least in films, has taken a turn in these last two years. From the fan backlash to the original design to now it having a solid following, it definitely feels like we have come very far. Sonic the Hedgehog ups the ante, as it not only is better from the original film, it also stands as one of the best videogame films we have gotten in a while. Sonic the Hedgehog 2 Movie: Review, Cast, Plot, Trailer, Release Date - All You Need to Know About Ben Schwartz and Jim Carrey's Film!

Directed by Jeff Fowler, Sonic the Hedgehog 2 sees the return of Eggman (Jim Carrey) to Earth alongside a new ally, Knuckles the Echidna (Idris Elba). Together the duo embark on a journey to get a hold on the Master Emerald that will fulfill their ultimate power fantasy. Sonic (Ben Schwartz) and Tails (Colleen O’Shaughnessey) must team up and get to the emerald before Eggman can get his hands on it.

Talking about the story, it dives deep into Sonic’s lore and introduces more characters from the games, like Tails and Knuckles. It does what every sequel does, and that’s go big. That works because it feels like a natural progression of how this story should be told, and the introduction of Tails and Knuckles feels earned.

Sonic’s progression also feels like a great step in the right direction. Whereas the first film was him trying to fit into this world, this one is about him trying to work with others and knowing his moment of becoming a hero. There are certain scenes where you just pull back and feel for him, and Sonic the Hedgehog 2 does a great job at being more emotionally impactful than its predecessor.

Where the story doesn’t work though is when we end up focusing on the humans. Tom (James Marsden) and Maddie Wachowski (Tika Sumpter) feel more like a backdrop to the film this time around as the makers didn’t know what to do with them in the first half. For so much of the movie they are just regulated to attending Maddie’s wedding, that it felt very derivative and redundant.

The entire wedding subplot had no bearing on the plot and has a twist that leads to nowhere. It felt like filler in the worst way possible, and that just brought down the film’s pacing whenever we were focusing on them. Sonic the Hedgehog Movie Review: Ben Schwartz and Jim Carrey’s Film Is Fun for Kids but Can’t Outrun Its Lazy Storytelling.

Sonic the Hedgehog 2’s pacing is also something that needs to be talked about. There are some scenes that end up going on for way too long, for example the final battle. Had it been a little trimmed down, it could have worked well.

But thankfully, these issues can be ignore as everyone puts on a charming performance. Ben Schwartz again proves why he was the perfect guy to voice Sonic. Also for Parks and Recreation fans, there is an Easter Egg for you in there, so pay attention. The energy that Schwartz brings to the role is greatly complimented by Carrey as well.

His Eggman is even more unhinged than before here, and that’s when Carrey works the best. It gives him great opportunities to tap into his physical comedy that he is known for and makes the film wildly enjoyable.

Newcomer Idris Elba voices Knuckles who is a more broodier character than the rest. The deepness in his voice sells the anger of this character, which also leads to some really funny scenes. With him basically being a fish out of water, Knuckles has to learn how to be more compassionate towards others, and his arc is one of the best in the film.

For the fans of the game, Colleen O’Shaughnessey returns to voice Tails in Sonic the Hedgehog 2. Like always, Colleen is fantastic as Tails and brings a great sense of cuteness and innocence to this character. Sonic the Hedgehog 2 Domestic Box Office: Ben Schwartz and Jim Carrey’s Film Earns $71 Million in Opening Weekend.

The CGI on all the anthropomorphic characters remains to be good, although there were times when you could clearly tell that Jim Carrey was standing in front of a green screen. Although, that didn’t really take much away from the film, but felt worth pointing out.

(The above story first appeared on LatestLY on Apr 21, 2022 12:12 PM IST. For more news and updates on politics, world, sports, entertainment and lifestyle, log on to our website latestly.com).