Other notable releases in the top 10 include 'West Side Story', which pocketed $2.1 million from 2,690 venues. In total, director Steven Spielberg's remake of the classic musical has made only $29.6 million in North America and $47 million worldwide, a disastrous result considering the acclaimed movie cost $100 million to produce. 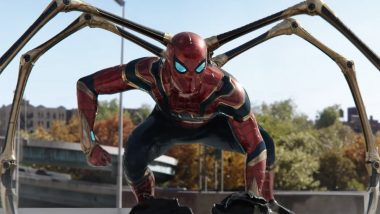 Hollywood star Tom Holland's 'Spider-Man: No Way Home' towered over domestic box-office charts for the third weekend in a row. 'No Way Home' minted $52.7 million over the New Year's holiday frame, boosting its domestic tally to $609 million, reports variety.com. It extends an epic streak for the latest Spidey adventure as the lone blockbuster to deliver the kind of ticket sales it would have been expected to make in pre-pandemic times. Spider-Man No Way Home Box Office: Tom Holland's MCU Film Storms Into Rs 200 Crore Club in India.

It now ranks as the 10th-highest grossing domestic release in history, supplanting Disney's 'Incredibles 2' ($608 million). 'Spider-Man: No Way Home' currently has its sights on spots eight and nine, 'Star Wars: The Last Jedi' ($620 million) and 'The Avengers' ($623 million). Globally, 'Spider-Man: No Way Home' has grossed $1.37 billion, passing 2018's 'Black Panther' ($1.34 billion) to become the 12th biggest film in history. International ticket sales have accounted for a bulk of that haul, with overseas revenues at $759 million. Spider-Man: No Way Home: First Scene From Tom Holland’s Film Gets Played On Late Night with Seth Meyers’ Show (Watch Video).

'Sing 2' enjoyed another relatively strong weekend. The film, which features an all-star voice cast of Matthew McConaughey, Reese Witherspoon, Scarlett Johansson and more, earned $19.6 million from 3,892 cinemas between Friday and Sunday, down a scant 12 per cent from its debut. Since landing on the big screen in advance of Christmas, the well-reviewed 'Sing 2' has generated an impressive (for pandemic times) $89.6 million.

To illustrate the headwinds still facing movies that aren't of the superhero variety, though, the follow-up is pacing significantly behind its predecessor. The original 2016 film 'Sing' sold far more tickets, ultimately grossing $270 million stateside and $634 million worldwide. 'The King's Man', a prequel to the 'Kingsman' series, landed in third place with $4.5 million from 3,180 theatres.

That's down only 24 per cent from inaugural weekend ticket sales, however, its box-office receipts weren't that strong to begin with. So far, the spy comedy has picked up $19.5 million at the domestic box office. Internationally, 'The King's Man' added another $14.1 million from 22 overseas markets, boosting its global total to just $47.8 million. At No. 4, sports drama 'American Underdog' earned $4.07 million. 'The Matrix Resurrections' fell to fifth place, scraping together $3.8 million from 3,552 locations over the weekend while playing on HBO Max.

Other notable releases in the top 10 include 'West Side Story', which pocketed $2.1 million from 2,690 venues. In total, director Steven Spielberg's remake of the classic musical has made only $29.6 million in North America and $47 million worldwide, a disastrous result considering the acclaimed movie cost $100 million to produce.

Among prestige fare, director Paul Thomas Anderson's coming-of-age film 'Licorice Pizza' landed in eighth place behind 'West Side Story' and 'Ghostbusters: Afterlife', which made $1.4 million over the weekend and $123 million to date. 'Licorice Pizza' served up $1.2 million from 786 locations, pushing its domestic total to $6.3 million.

(The above story first appeared on LatestLY on Jan 03, 2022 02:11 PM IST. For more news and updates on politics, world, sports, entertainment and lifestyle, log on to our website latestly.com).