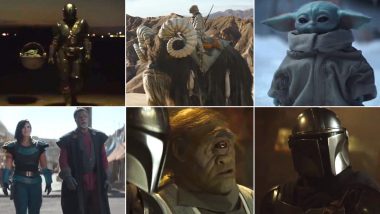 Disney hit it out of the park with the Star Wars spin-off series, The Mandalorian. The debut season on Dinsey+ was loved by millions of fans across the globe. Everyone is all geared up for season 2 of The Mandalorian. The first trailer of the upcoming season has dropped online and it is a visual delight from the word go. First things first, yes, there's Baby Yoda in the new trailer. We also get to hear him coo and almost get into a fight. Darksaber also makes an appearance. Lucas Films, thanks. The Mandalorian: Ludwig Göransson's Theme of the Star Wars' Show Gets a Gorgeous Music Video.

The events of season 2 of The Mandalorian will begin where the first season ended. The Mandalorian aka Din Djarin (Pedro Pascal) and Baby Yoda aka The Child have begun a new journey to find the latter's family and home. They also have to face Imperial Remnant officer Moff Gideon (Giancarlo Esposito) who wields the Blacksaber.

While do not get to learn much about the storyline, we get a glimpse of the new set-pieces that will be in the series. The Mandalorian season 2 streams from October 30 on Disney+. The Mandalorian: Disney Plus Series' Third Season is Already In the Works.

Watch The Trailer For The Mandalorian Season 2 Here:

"Wherever I go, he goes." Watch the brand new trailer for #TheMandalorian and start streaming the new season Oct. 30, only on #DisneyPlus. pic.twitter.com/0E3mtUcZO9

Rosario Dawson, Timothy Olyphant, Temuera Morrison, Katee Sackhoff, and Michael Biehn are rumoured to be joining the cast. Jon Favreau confirmed that he will direct a few episodes. In fact, Bryce Dallas Howard is also directing an episode of the new season. She has said, "It's so wonderful to be asked back. It's been such a freaking blast. And I have to say the amount of progress that everyone has made behind the scenes, in terms of the technology and what they're able to do from the first season to the second season is kind of mind-blowing."

(The above story first appeared on LatestLY on Sep 15, 2020 08:02 PM IST. For more news and updates on politics, world, sports, entertainment and lifestyle, log on to our website latestly.com).