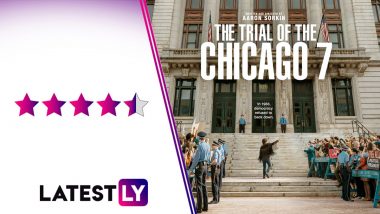 The Trial of The Chicago 7 Movie Review: Aaron Sorkin's latest political drama is based on the controversial court proceedings against what the press, dubbed as Chicago Seven in 1968. The group, who were the leaders of the anti-Vietnam War protests, was indicted of charges of inciting riots during  1968 Democratic National Convention in Chicago. The Trial of The Chicago 7 follows the courtroom sessions that happened, intercut through which we get glimpses of what exactly happened during the protests that turned it into a riot-like situation. OTT Releases Of The Week: Priyanka Chopra's Evil Eye on Amazon Prime, Sacha Baron Cohen’s The Trial Of The Chicago 7 on Netflix, and More.

Actually, Chicago 7 is an aberration, since they are eight defendants put on trial. Among the seven, we have Abbie Hoffman (Sacha Baron Cohen), Jerry Rubin (Jeremy Strong), David Dellinger (John Carroll Lynch), Tom Hayden (Eddie Redmayne), Rennie Davis (Alex Sharp), John Froines (Daniel Flaherty), and Lee Weiner (Noah Robbins). The final two get minimal scope here, but as Lee puts it out, it is likely being getting nominated for the Oscars so it is an honour for them to be just there.

The eight defendant is the only black man in the group, Bobby Seale (Yahya Abdul-Mateen II), who keeps saying he has no connection with the rest of the group, having only been in Chicago for just four hours to give a speech. He wonders why he is even on their trial, when it is called Chicago 7, and is the only one without legal representation, which the court keeps ignoring.

Watch the Trailer of The Trial of The Chicago 7:

The Chicago 7 is represented legally by William Kunstler (Mark Rylance) and Leonard Weinglass (Ben Shenkman). The prosecution duty is handed over to Richard Schultz (Joseph Gordon-Levitt), to whom the Richard Nixon-government coaxes to get an indictment for the defendants. The court is ruled by Judge Julius Hoffman (Frank Langella), who clearly is biased against the defendants, evident from day 1.

It is a perfect setting for the acclaimed Aaron Sorkin to let out his biting social commentary and razor sharp lines into action, and the result is one of the strongest movies to come out of his stable. His sharp direction, along with an excellent cast, rousing writing and brilliant editing (Alan Baumgarten), lends to one of the best courtroom dramas that I have seen in recent times. Sure, it comes across as viewer-pandering in its tone, but that helps, when you have a message, a very relevant one, to be spoken across.

Thought The Trial of The Chicago 7 is based on a real-life legal drama that happened in the '60s, we can still draw contemporary parallels to it. And you don't have to be an American to do that. Just look at how the Delhi Riots that happened earlier this year has been (mis)handled to realise how unfairly skewered the police and the justice system is here. So the timing of The Trial of The Chicago 7's release is so right, especially with the rise of fascism in quite a few countries. Including ours.

Aaron Sorkin's work comes best when he makes the character bounce off his powerful dialogues off each other, resulting in some highly engaging dramatic scenes. When done right, it results in something awesome as The West Wing or The Social Network. When overdone, it can turn into The Newsroom. At times, The Trial of The Chicago 7 threatens to go The Newsroom way, but thankfully, Sorkin brings back the tight leash on the film. The frequent skirmishes between the judge and the defendants and Kunstler are quite stirring, while the hippie Rubin and Abbie's witty snarks are often a welcome addition. The straight guy Hayden's attitude-clash with culturally-free Abbie are also quite engaging to watch.

The scene where Beale take a final stand against the judge and the resultant mess is heartbreaking. And the film becomes more forceful in the third act, as we get to see how the Seven get arrested, when Abbie takes a stand and then the final scene, that is both emotional and rousing. The Trial Of The Chicago 7 Trailer: Sacha Baron Cohen, Eddie Redmayne, Yahya Abdul-Mateen II Impress in Aaron Sorkin's Political-Legal Drama.

Sorkin also benefits from an excellent cast, with Sacha Baron Cohen and Mark Rylance often ending up stealing the show. Cohen gets away with the funnier lines but it is in the more serious sequences, where he leaves a brilliant mark as an actor. Especially the scene where he takes the stand. He has fantastic company from Jeremy Strong, who we know how good he is from HBO's Succession. Rylance skillfully depicts his character's frustrations against the legal system he is fighting within, showing us that he can also do exemplary work outside a Steven Spielberg film (Incidentally, Spielberg was once touted to make a film on this trial).

Redmayne's character is someone who wants to do right in the right manner, which makes it not a very audience-pleasing character. And yet, he does fantastic job in making Hayden someone worth rooting for, especially in the third act. Yahya Abdul-Mateen II's Beale is reflective of the present of #BlackLivesMatter movement, and the actor puts up a very impressive show.

Joseph Gordon-Levitt is fine as the prosecutor with a conscience. If you end up hating Judge Hoffman, it has a lot do with the veteran Frank Langella's performance in making him such a flawed man. Michael Keaton leaves an impact in a cameo.

- The Acting, Director and The Performances

- A Bit Too Rushed and Gets Over-Snippy At Times

(The above story first appeared on LatestLY on Oct 16, 2020 04:50 PM IST. For more news and updates on politics, world, sports, entertainment and lifestyle, log on to our website latestly.com).