The White Tiger: Cardi B Has THIS to Say About Priyanka Chopra, Rajkummar Rao, Adarsh Gourav’s Film

Priyanka, Rajkummar, and Adarsh have also received honourable mentions in the Gold List selections for their powerful performances in the insanely popular Netflix film. 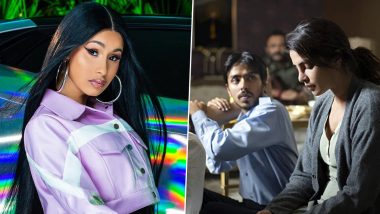 The White Tiger starring Priyanka Chopra, Rajkummar Rao and Adarsh Gourav is making all the right kind of noises. The film is receiving immense love from the audience worldwide and people are loving Gourav's acting in the film. Priyanka has been sharing all the reviews, appreciation messages and posts on her social media and celebrating the success of the film. The actress' closest friends have been sharing posts about this film and now adding to the list is WAP singer Cardi B. The White Tiger Review: Priyanka Chopra Jonas, Rajkummar Rao and Adarsh Gourav’s Film 'Roars' As Per The Critics.

Cardi B is very active on social media and is often seen posting her views on different topics. She happened to watch The White Tiger recently and loved it so much that she tweeted about the film. In her tweet, she called Priyanka, Rajkummar and Adarsh's movie a great one and added that she was crying and was angry while she watched it. Priyanka replied to her tweet and said, "Same

@iamcardib! Thank you, so happy you enjoyed it."

White tiger is such a great movie. I was crying and angry watching it .

Adarsh Gourav's work is being highly appreciated by the critics. He has even bagged a berth in the nomination list of Internationa Spirit Awards 2021. He has been nominated in the Best Actor category for the Netflix film alongside Chadwick Boseman, Riz Ahmed and others. Gourav plays a poor boy named Balram in The White Tiger who starts working as a driver for a wealthy family in India. Rajkummar is the person her drives for while Priyanka is seen essaying the role of Rao's wife. The White Tiger: Nick Jonas Reviews Wifey Priyanka Chopra’s Netflix Film; Calls It 'Unreal' and Hails PeeCee as 'Exceptional'!

(The above story first appeared on LatestLY on Jan 28, 2021 03:51 PM IST. For more news and updates on politics, world, sports, entertainment and lifestyle, log on to our website latestly.com).