The White Tiger: Nick Jonas Thinks Priyanka Chopra May Be the ‘First Jonas’ to Win an Oscar For Her Netflix Film

Nick was seen promoting The White Tiger himself before its release. He had posted a picture of himself watching the film and said that the movie is amazing. He even had tweeted on the release day of the film. 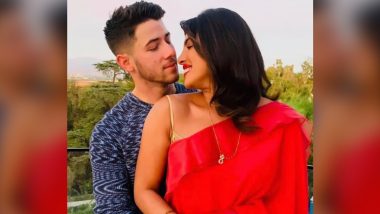 Priyanka Chopra has been basking on the glory of her recently released Netflix film, The White Tiger. Also starring Rajkummar Rao and Adarsh Gourav in pivotal roles, the film has been impressing the audience worldwide. Priyanka had been promoting the film quite rigorously before the release and has been talking about it even after its premiere online. During one such chat on Variety‘s Awards Circuit podcast, Priyanka revealed that her hubby Nick Jonas thinks she may have a chance to bag an Oscar for the film. Priyanka Chopra-Nick Jonas First Wedding Anniversary: 8 Beautiful Pics From Their Hindu and Christian Marriage That Prove They Were Destined to be Together!

Priyanka revealed on the podcast and said that Nick has been very supportive for her ventures, She added, "He was like, 'You may be the first Jonas to win an Oscar.'" She went on to talk about how she landed the role after a lot of hard work as she went after the film. “I’m really looking for a trajectory where I have the ability to play various characters and genres and not be bogged down or put into a box or a stereotype of what I can do,” she said. “That was my career in India. I've played various different characters, and I've played a lot of immersive parts," added Chopra.

Nick was seen promoting The White Tiger himself before its release. He had posted a picture of himself watching the film and said that the movie is amazing. He even had tweeted on the release day of the film and said, "The White Tiger is out now on @netflix !!! So incredibly proud of my wife @priyankachopra for her work as both an actor and a producer on this movie. Everyone do yourself a favour and go watch this movie right now! Congrats to the entire cast and crew and creative team." Priyanka Chopra-Nick Jonas Wedding: PC’s 75-Ft Long Veil Inspires Hilarious Memes on Twitter.

Apart from this, Priyanka recently also launched her haircare range called Anomaly. "This is ANOMALY. What a surreal moment to introduce you to the first brand I have ever created!!! For the last 18 months, I have worked alongside my partners at Maesa toward the day when we could share our labour of love with the world, and I can't believe that time has finally arrived. I've tried a lot and learned a lot about hair care over the years," she wrote while introducing everyone to her products.

(The above story first appeared on LatestLY on Jan 30, 2021 05:51 PM IST. For more news and updates on politics, world, sports, entertainment and lifestyle, log on to our website latestly.com).