Thunderbolts is reportedly in development at Marvel Studios. The film is set to be directed by Jake Schreier and the script will be written by Eric Pearson. 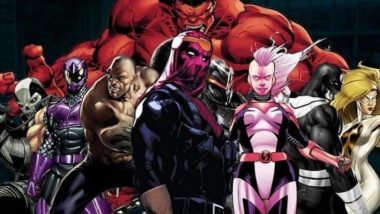 In a recent report by Deadline, Marvel Studios is reportedly developing a film based on the comic book anti-hero group, the Thunderbolts. The project is reportedly to be helmed by director Jake Schreier, who is best known for his work on Paper Town, and Black Widow writer Eric Pearson to pen the script. Thunderbolts: Kevin Feige To Produce New Film That Is in Works at Marvel Studios, Jake Shreier To Direct.

For a long time now Marvel has been setting up the Thunderbolts in the MCU. With characters like Ghost, US Agent and Yelena Belova being introduced, the writings were on the wall for a Thunderbolts film. So, with Thunderbolts finally in development, let's take a look at what the movie might actually be about. Ms Marvel Series Review: Iman Vellani’s Disney+ Show is a Sweet, Rebellious Coming-of-Age Drama Wrapped Up in Superheroics! (LatestLY Exclusive).

Check Out The Source Below:

#Thunderbolts movie is in development

According to Deadline, currently the potential characters supposed to appear in the film are Baron Zemo (Daniel Bruhl), Yelena Belova (Florence Pugh), Ghost (Hannah John-Kamen), Taskmaster (Olga Kurylenko), The Abomination (Tim Roth), US Agent (Wyatt Russell) and Winter Soldier (Sebastian Stan). William Hurt's Thaddeus "Thunderbolt" Ross could have been a part of the film as well, but sadly he passed away last year. However, we can expect Julia Louis-Dreyfus' Valentina Allegra de Fontaine to appear in the film.

The plot of the film isn't known yet. In the comic books Thaddeus Ross gathers a strike-force of anti-heroes so that they could band together and get their hands dirty to do some good. We can expect a similar plotline here, however with the exception of Ross.

There is another Thunderbolts team in the Marvel comics that was spearheaded by Baron Zemo. Zemo becomes the leader of the group and gathers a bunch of supervillains so that they could gain the authorities trust and have access to public utilities and more.

If anything, we can expect the film to tackle these two ideas and maybe combine them together.

The release date for the film is currently unknown, but seeing as to how Marvel likes fast-tracking their projects, we can expect Thunderbolts to release sometime in 2024 or 2025.

Thunderbolts is being directed by Jake Schreier. Schreier is best known for directing Paper Towns and Robot and Frank. Deadline also reported that his presentation for the film blew the execs away. The film is also being penned by Black Widow writer Eric Pearson.

(The above story first appeared on LatestLY on Jun 10, 2022 03:00 PM IST. For more news and updates on politics, world, sports, entertainment and lifestyle, log on to our website latestly.com).