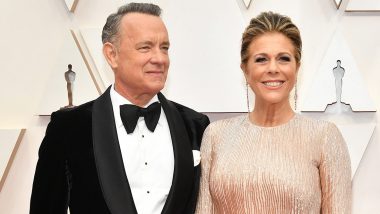 Tom Hanks and his wife Rita Wilson were two of the first notable figures to be diagnosed with COVID-19. Tom was in Australia, with Rita, to shoot for am upcoming biopic on Elvis Presley when he was tested positive. The shoot obviously halted and the actor was quarantined with wife. Both recovered. Now, in a chat with Stephen Colbert on The Late Show, Tom has given us more details about his time when he was infected by the novel coronavirus. "We had no idea how it could have happened, where it could have happened," Hanks said. Tom Hanks Birthday: 5 Cool Movies and Where To Watch Them Online.

"Other than a headache, she had a higher fever than I did, she had horrible nausea,” Hanks continued. The symptoms for the two of them were very different.

"I had bones that felt like they were made out of soda crackers," he added. "Every time I moved around it felt like something was cracking inside of me." He also complained about "having really sore butt."

"Our discomfort because of the virus was pretty much done in two weeks and we had very different reactions, and that was odd,” he said.

Tom and Rita donated blood plasma after recovering from the disease. "I thought it was like giving blood," the 64-year-old actor said, "You go in and they hook you up to, essentially, the world's most complicated Slurpee machine and I thought they take the blood out." Tom Hanks Is Still Donating His Plasma for Research Purpose to Combat COVID-19.

"They take the blood out, but then they put it right back in. They're taking the plasma out of your blood," he described. "You're not losing any blood. You're essentially losing moisture, water, liquid, the plasma that is in your blood. I did it twice. There's no discomfort in it."

"We give about 800 millilitres and from that four people can be treated," revealed Hanks.

"I'm going to say it's about the size of a Big Gulp," Hanks concluded. Big Gulp is a cup for Slurpee sold at stores in the US.

(The above story first appeared on LatestLY on Jul 16, 2020 09:14 PM IST. For more news and updates on politics, world, sports, entertainment and lifestyle, log on to our website latestly.com).