Tom Hardy's Bane masks from Dark Knight Rises are currently in demand online and their sale has gained momentum since the coronavirus outbreak. 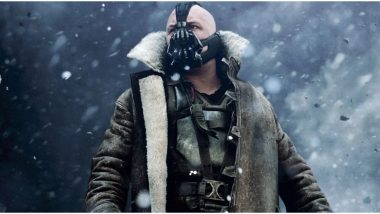 Did you ever imagine there would be a time when Bane masks would sell like hotcakes? Yes, the big bad villain from Christopher Nolan's Dark Knight trilogy. The one who appeared in Dark Knight Rises with Christain Bale. While Hardy was appreciated for his portrayal and characters were in favour of his well-written character, we never imagine a virus and not a Halloween party would boost the mask's online sales. Covering your mouth with a mask while stepping out is currently mandatory all over the world and to make their experience worthwhile, residents in the west are opting for stylish masks that would not ruin the fun. Tom Hardy Does it Again, Drops a Hint About Spider-Man vs Venom Face-Off and Deletes it Later (View Pic).

As per a new report in The Hollywood Reporter, Tom Hardy's Bane masks are currently in demand online and their sale has gained momentum since the last couple of months. Bane's mask which supplied his character with a pain-killing gas is sold out on different costume sites like Costume.com, BuyCostumes.com and HalloweenCostumes.com. While officials insist the mask is not useful during the ongoing pandemic and they should not be preferred, citizens are least bothered about these concerns.

Costume.com's spokesperson in his conversation with THR said, "Looking at sales figures, the adult mask had quite a sales spike in April and early May, which is unusual for this time of year." He further elaborated on how they are already out of stock with few exceptions in the children's masks. Capone Movie Review: Tom Hardy is Brilliant, His Gangster Drama Not So Much, Say Critics.

He also explained why the demand for these masks is bound to soar in the coming months. Since the masks came in from China, their supply chain is broken currently and hence the demand is more while the supply is less. While Halloween is usually the time when these sites see a spike in such demands, the ongoing coronavirus outbreak has made the impossible scenario look possible.

(The above story first appeared on LatestLY on May 20, 2020 08:21 PM IST. For more news and updates on politics, world, sports, entertainment and lifestyle, log on to our website latestly.com).