Maverick is a much-awaited follow-up to the 1986 blockbuster Top Gun, which changed Cruise's life and career, making him an overnight Hollywood heartthrob for his performance as suave and daring US Navy aviator Pete Maverick Mitchell. 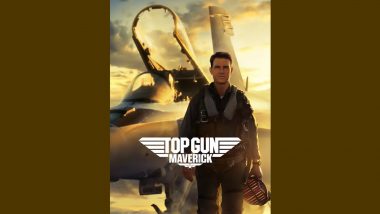 Seeing Tom Cruise in action can never go wrong. The actor established himself as an action star with the Mission: Impossible franchise and steps out of that role from time to time to give fans something new. Not falling too far from the genre, the actor returned for Top Gun: Maverick, a film that is slated to hit the screens on May 27 in India. Tom Cruise Makes Grand Entry in Helicopter at World Premiere of Top Gun: Maverick.

Maverick is a much-awaited follow-up to the 1986 blockbuster Top Gun, which changed Cruise's life and career, making him an overnight Hollywood heartthrob for his performance as suave and daring US Navy aviator Pete Maverick Mitchell. The film was shown to a few critics before its release worldwide, and the word on the street is that the film is a spectacle. Just like the first part, Top Gun: Maverick has impressed everyone. It has been declared the 'Most Satisfying Summer Action Movie’ by critics, proving that the film will be worth a watch.

Here's What Critics Have to Say:

Variety: "Top Gun has always been “The Tom Cruise Show,” and no one believes for a second that Maverick won’t manoeuvre his way into flying the climactic mission. But he can’t do it alone: The operation calls for perfectly coordinated teamwork among six pilots, recalling the group air battle that bonded Iceman and Maverick in the original movie.  It’s the way we identify with the guy when he’s doing what most of us thought impossible. Turns out we need Maverick now more than ever."

The Hollywood Reporter: "The film’s most moving element comes during the brief screen time of Kilmer’s Iceman, whose health issues reflect those suffered by the actor in real life, generating resonant pathos. There’s reciprocal warmth, even love, in a scene between Iceman and Maverick that acknowledges the characters’ hard-won bond as well as the rivalry that preceded it, with gentle humor."

The Guardian: "There’s plenty of rock’n’roll fighter-pilot action in this movie, but weirdly none of the homoerotic tension that back in the day had guys queueing up at the Navy recruitment booths set up in cinema foyers. Weirder still, it is actually less progressive on gender issues than the original film. Cruise’s movie-star chops are still miraculous though, and he has a genuinely touching dialogue scene with Kilmer. Now I want to see him take on a sequel to Risky Business and do the underpants dance again." Ahead of Top Gun: Maverick Release, Tom Cruise's Old Clip From the 90s Saying the Film's Sequel Would be Irresponsible Resurfaces.

Los Angeles Times: "Top Gun: Maverick is a longer, costlier and appreciably weightier affair, and its expanded emotional scope and heightened production values (including a score by the original film’s composer, Harold Faltermeyer) give it a classy, elegiac sheen; it’s like a hot summer diversion in prestige-dinosaur drag, or vice versa. As a rare big-budget Hollywood movie about men and women who fly without capes, it has a lot riding on it. Once set for a summer 2020 release but delayed almost two years by the pandemic, it arrives bearing the hopes and dreams of a tentatively resurgent industry that could use a non-Marvel theatrical hit."

IndieWire: "It’s become an increasingly self-evident truth that Cruise is the last Hollywood movie star of his kind — short as ever but still larger-than-life in an age where most famous actors are only as big as their action figures — and the new Top Gun isn’t exactly subtle about the self-commentary it offers on that situation. From new recruits to grizzled vets, every character in this film regards Maverick as both a relic and a god (sometimes in the same breath). Even the guy’s on-again-off-again love interest, a thinly written bar owner who Jennifer Connelly wills into a flesh-and-blood woman, thinks of him as an old flame whose light has never gone out."

(The above story first appeared on LatestLY on May 12, 2022 09:20 PM IST. For more news and updates on politics, world, sports, entertainment and lifestyle, log on to our website latestly.com).