Ever since Kanye West announced about his candidature, Twitterati can’t keep calm thinking about the reality star Kim Kardashian becoming the First Lady. 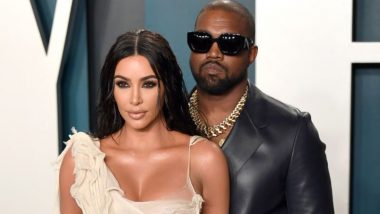 On the Fourth of July, American rapper Kanye West dropped a major surprise to all his fans. Kanye announced that he would be running for 2020 US Presidential Elections that’s scheduled to be held on November 3. He tweeted, “We must now realize the promise of America by trusting God, unifying our vision and building our future. I am running for president of the United States!” Ever since Kanye announced about his candidature, Twitterati can’t keep calm thinking about the reality star Kim Kardashian West becoming the First Lady. Kim Kardashian’s Husband Kanye West Announces 2020 Presidential Run (View Tweet).

Kanye West’s announcement has taken the internet by storm. There are many who have extended their support to the singer – composer and that also includes Elon Musk who responded to his tweet by saying, “You have my full support!” But right now, Twitterati is discussing about Kanye’s win as the US President and his wife Kim Kardashian becoming the First Lady. There are numerous funny memes and jokes being shared around it. Twitterati is discussing what will happen to US if the popular couple takes the lead. Some are even wondering what else 2020 has to offer after all the pandemic scenario. Let’s take a look at the tweets below and see what netizens have to say about Kanye running for presidential elections and what would Kim be doing if he wins.

If Kim Becomes The First Lady

Kanye is running for presidency, which means Kim Kardashian could be the next First Lady LMFAOOO

kanye west is running for president....which could make kim kardashian the first lady...i want OUT of this country no joke pic.twitter.com/53BwHpW9PM

Some Selfies From The White House Can Be Expected

my bet is that if kanye becomes president kim kardashian will release a makeup collection called first lady#FirstLady pic.twitter.com/KALJIUxxG0

And A New Reality Show

2020 Is Full Of Surprises Err Shocks

New Season Straight From The Oval Office By KimYe

2020 is not done yet,were you trying to exhale...dont! ...the next season of Keeping Up With The Kardashians will be brought to you straight from the Oval office! #KanyeWest #KimKardashian pic.twitter.com/dO4IXiBoGc

This isn’t the first time that Kanye West has expressed about his interest in running for US President Elections. Since quite a long time he has been showing his interest in jumping into politics. Kanye has not shared further details on his campaign or his party affiliation.

(The above story first appeared on LatestLY on Jul 05, 2020 10:49 AM IST. For more news and updates on politics, world, sports, entertainment and lifestyle, log on to our website latestly.com).