Veteran actor Val Kilmer turns 61 today. He has entertained the audience across the globe with a variety of roles over the decades. Here are five of the most entertaining movies that the actor has featured in. 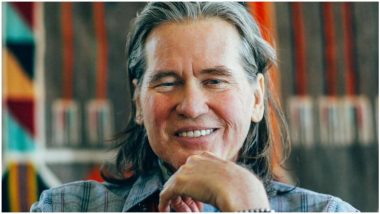 Veteran actor Val Kilmer turns 61 today. He has entertained the audience across the globe with a variety of roles over the decades. He is not just famous for his acting, but his compassion as well. He once refused to star in a big movie, because he would have to pull out of a play, which would lead to its shutdown and his colleagues won't get that paycheque. Now, that is an artist, right there. Over the many years, Kilmer has featured in some iconic movies, helping the projects acquire that adjective with his acting skills and his craft. Val Kilmer Hasn't Dated Anyone in 20 Years.

Asked about the reason why he chose to be an actor, and he took a stroll down the memory lane. "I was going to movies and watching TV, going to the theater a little bit. It was, like, 'Wow, you could make a living doing this? Great! What could be better?' There isn't anything I could choose better," he said. So, today, to honour the great actor, we are going to list down some of our favourite films and performance of Val that will forever be etched in the hearts.

Of course, we had to start with this one. After Michael Keaton stepped away, Kilmer deemed the fittest to play the role of the caped crusader.  Two-Face (Tommy Lee Jones) and the Riddler (Jim Carrey) were Batman''s foes in the film, while Nicole Kidman played the love interest. What a starry ensemble. He brings a certain madness to the character that no other Batmans have been able to draw. Val Kilmer's Batman Forever Had a Subplot of Bruce Wayne Discovering that His Parents' Death was His Fault.

The actor stars in this bonkers comedy with Robert Downey Jr. If you have not watched it, do it right away. Kilmer plays a gay detective in the movie and plays it with playful cockiness that's just hilarious to watch on the screen. His banters with Robert are a laugh riot. His character boasts of narcissism and vulgur lines.

Val Kilmer shows that he doesn't need a lead role to be memorable. He makes a strong impact in a supporting role opposite Al Pacino and Robert DeNiro with his witty lines.

Kilmer played The Doors' Jim Morrison on the big screen. What a nuanced performance. He beautifully captures the enigmatic journey of the musician, while also capturing the darkness that comes along on this journey.

In his second outing, Kilmer charmed everyone with his good looks. The actor played the role of a genius boy who prefers chasing girls over science.

A very happy birthday to Batman Forever. Val Kilmer will be rising his role 35 years later in Top Gun sequel Top Gun: Maverick. He also stars in The Birthday Cake, which is under post-production.

(The above story first appeared on LatestLY on Dec 31, 2020 09:55 AM IST. For more news and updates on politics, world, sports, entertainment and lifestyle, log on to our website latestly.com).