We Can Be Heroes Movie Review: Priyanka Chopra, Yaya Gosselin's Superhero Film Is a Burst of Action and Comedy In Classic Robert Rodriguez Style (LatestLY Exclusive)

We Can Be Heroes is a fun movie that you should love if you are aware of Rodriguez's filmography. Watching kids in action is super cool. The movie might not give you the rush of energy like you have come to expect of superhero movies, but it will make you giggle and feel positive. 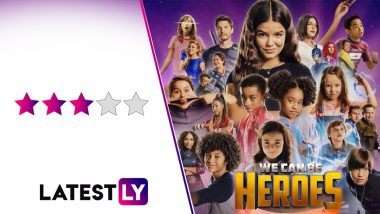 We Can Be Heroes Movie Review (Photo Credits: File Image)

First things first, if you a Priyanka Chopra fan streaming We Can Be Heroes to see desi girl in action, maybe watch The Sky Is Pink on Netflix instead. Here she gets limited screentime, although more than other grown-up cast members, and not adequate character growth. But we are not complaining. Robert Rodriguez's We Can Be Heroes is a kids movie - a fun, campy, funny, joyous ride. If you have grown up watching Spy Kids series and The Adventures of Shark Boy and Lava Girl, and if you liked them back in the days, this movie will be a nostalgic ride that will make you feel like a kid again. We Can Be Heroes Trailer: Priyanka Chopra's Next Hollywood Outing Looks Like A Promising Watch (Watch Video).

As a matter of fact, this movie is in the Shark Boy and Lava Girl universe where both the character reappear. While Taylor Dooley reprises her role as Lava Girl, Taylor Lautner misses the opportunity...nah...misses a great opportunity. Had the Best Time Shooting for 'We Can Be Heroes': Priyanka Chopra Jonas.

Some might call the execution of the movie dated, but I'd look at it as director's filmmaking style. The film doesn't take itself too seriously, despite the plot being about some kids of superheroes realising their superpowers to save their parents. In fact, the movie takes digs at many superhero movies for the costumes and internal fights and alien spaceships are too intuitive as if made for the kids to operate. YaYa Gosselin as Missy Moreno leads the pack of kids with weird superpowers - one is super slow-motion, which makes for a funny running gag. Interestingly, Missy doesn't have any superpowers and she doesn't develop any through the course of the film. It is just her sharp brain that helps her throughout, which is so unexpected it almost feels like a twist.

The dangers are never too real in the film, Things get solved easy peasy. Conflicts get solved as easily as they were born. For the most part, the movie remains a lighthearted action film for the kids. But, during the climactic battle, the film falters.

You see, the movie has spent most of its time not treating the kids like idiots - neither the characters in the movie nor the kids who are watching it. It also doesn't treat them like adults, like in Shazam. It strikes a balance between that mindless and sanity. But the climax is just too shallow, too watered down and almost undoes what the movie seems to be doing so far. The end is...childish.

Priyanka Chopra...well, she performs like she is in a kids' movie. She is over the top, almost caricaturish of villains. And, I think that's awesome. Villains in the kids' movie are always like that, which is what makes it fun. Vivien Blair as Guppy is the best in the lot. She lights up the screen every time she appears. Too good of a casting. YaYa Gosselin has the makings of a star.

-Lack of a developed antagonist

We Can Be Heroes is a fun movie that you should love if you are aware of Rodriguez's filmography. Watching kids in action is super cool. The movie might not give you the rush of energy like you have come to expect of superhero movies, but it will make you giggle and feel positive.

(The above story first appeared on LatestLY on Dec 25, 2020 08:46 PM IST. For more news and updates on politics, world, sports, entertainment and lifestyle, log on to our website latestly.com).