Wonder Woman 1984 has released in theatres. The movie starring Gal Gadot as the titular superheroine takes us through her new adventures in the '80s when she has adjusted her life in the 'modern' world. Here are 5 mindblowing scenes from the film. 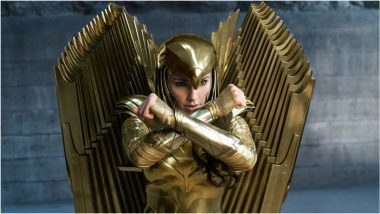 Wonder Woman 1984 has released in theatres. The movie starring Gal Gadot as the titular superheroine takes us through her new adventures in the '80s when she has adjusted her life in the 'modern' world. She makes new friends and new enemies and finds old love in this heartfelt movie by Patty Jenkins. It is not mindless, things blowing up every 5 minutes, kind of superhero movie. It tells us a gentle story about romance and humanity. It is warm and endearing and it has some mindblowing scenes, nevertheless. Gal Gadot's Wonder Woman 1984 Has an Awesome Cameo in Mid Credits Scene and Here's What It Means [Spoiler].

We are here to talk about some of the most mindblowing sequences in the Gal Gadot starrer film. These are not only the scenes featuring Diana Prince/Wonder Woman but we have also given some attention to Barbara (Kristen Wiig) who later becomes the film's villain, The Cheetah. Wonder Woman 1984 Movie Review: Gal Gadot Lassos Some Much Needed Cheer At The End of a Terrible Year (LatestLY Exclusive).

We hear Wonder Woman's epic theme song for the first time when she tries to stop Pedro Pascal's Maxwell Lord from ruining the world by using the wish-granting Dreamstone. To her dismay, she learns that Lord has become the embodiment of Dreamstone. His convoy attacks Wonder Woman, who charges into action. She fights off tanks and machine guns. At one point, to save Steve from the incoming bullets, she uses a tanker as a shield. It is an insanely cool scene.

In one scene, while she's walking to her home in the night, Barbara gets harassed by a drunk man, who almost assaults her. She is saved in nick of time by Diana. Later, after gaining superpowers, Barabara comes across the drunk man again who harasses her AGAIN. This time Barbara teaches him a lesson and brutally beats him up. The scene is also a reflection of how Barbara is losing her virtues as she becomes more powerful. But, a powerful scene, nevertheless and you don't exactly feel any sympathy for the drunk man.

In one of the most heartbreaking scenes, a weakened Gal Gadot - the price she has to pay for her wish - renounces her wish. She walks away from Steve, crying, doesn't look back, and takes back her wish, regaining her powers. She jumps into the sky with her lasso and starts to harness the wind with her lasso. She takes into account the rules of aerodynamics and begins to soar in the air. The flying looks rough, as this is the first time she's doing it, that, too right after breaking her heart again.

Barbara Vs Wonder Woman At The White House

Barbara attacks Wonder Woman while they are at the White House. Wonder Woman has become weak - a price she has to pay for her wish to come true - and she's barely able to hold off her nemesis. She loses the fight. Gasp! She is lying there on the ground, dark circles developing around her eyes, hair dishevelled, breaking breath. The sight is haunting.

Wonder Woman doesn't win this fight with brut force. But she wins the battle against evil with her truth. Her moving words help transform the world. We see that humanity is worth saving after all. Maxwell is granting wishes across the globe, taking something precious away from everyone. Wonder Woman speaks to the world, with her lasso of truth, and a secret broadcasting system of course, and she's able to get through everyone.

(The above story first appeared on LatestLY on Dec 26, 2020 07:02 PM IST. For more news and updates on politics, world, sports, entertainment and lifestyle, log on to our website latestly.com).