From Park Hyung-sik as Jo Myung Soo to Yook Sungjae as Yoo Deok-hwa: 5 Kdrama Character Spin-offs We Want But Will Never Have

There are some kdrama characters who leave you asking for more. You want to see what became of them when the regular flow of the story ends. Today we have five such kdrama characters which we would love to see a spin-off of but we are quite sure we won't get them. 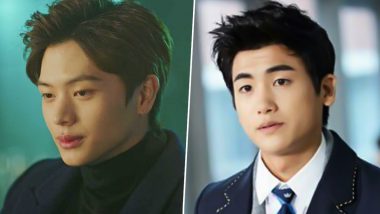 Korean dramas belong to a strange world. Apart from making you a fan of their narratives and the leads, you become obsessed with the supporting characters as well. They are written so well you always want to see more of them. It doesn't matter if they have lesser screen time. Most of them manage to make a room in our hearts. Hence you will often find the viral meme on 'Started for them, Liked Them More'. Prison Playbook, My Mister, Juvenile Justice - 5 Korean Dramas To Watch If Romance Is Not Your Jam.

There are also those characters who leave you asking for more. You want to see what became of them when the regular flow of the story ends. But it seems only fans are left with that desire as very rarely they return on the screens. Today we have five kdrama characters which we would love to see a spin-off of but we are quite sure we won't get them.

Heirs had some of the biggest Korean drama actors in the cast and also those who were yet to become the stars they are today. Park Hyung Sik played the cheery son of the owner of a rich lawyer firm who loves gossip and doesn't mind gaslighting people. The glow-up Hyung-sik had post this show deserves a separate story. We would have loved to see what became of Jo Myung Soo, the naughty Chaebol kid. Did he become a TMZ kind of tabloid reporter which seemed right up his alley or joined his father's law firm? Hyung-sik hasn't really played a role like that post Heirs. Yet another reason to explore this!

Yook Sungjae played Yoo Deok-wa, Goblin's (Gong Yoo) made-up nephew. He is playful, young, unscrupulous grandkid of a rich man who serves the Goblin. While he is wily, he is loyal to his uncle and a very expressive actor. He also gets possessed by none other than God. Now CW's show Supernatural has taught us any kind of possession leaves its mark on the soul, even if its God. Deok-hwa for a spin-off will thus could explore this part. We are also kicked that it could mean a return of the Goblin cast at least for a few scenes. But guess we are asking for too much!

Seo Yi Sook played Goddess Mago and her several avatars. Yes, makers too dabbled with different forms of one Goddess. Mago is the deity of longevity and in this show she creates the ghosthouse as a waiting room for souls to cross over to the other side. She gives flowers to every soul preparing for their to afterlife and ensures none of them go stray or they will feel her wrath. That makes her character so interesting. Everyone on the show has a history but we aren't too sure about Mago. Is she truly a deity or some good soul who became God's favourite to take care of his creation? Think about it.

It broke our hearts when Kim Seon-ho didn't get his love. Han Ji Pyeong is such a likeable character but he lacked courage to profess his love. A spin-off on him would be highly interesting as we will get to know if he will ever find love again. At the end of the series, Ji Pyeong is seen investing in a company that provides shelter to orphaned kids. Maybe he will meet someone! There's so much promise in this character. Twenty Five Twenty One, Thirty Nine, Pachinko - 5 Kdramas of 2022 That Gave Life Lessons We Didn't Know We Needed.

There's so much to learn from this series, especially what happens to Sung-tae (Oh Jung-se). It shows how an autistic man dependent on his brother for everything, decides to have a life of his own and become an illustrator. Sung-tae brings so much hope and joy in the show that his journey from thereon deserves a series of its own. This character can be an inspiration for so many and we don't necessarily mean special people.

Korean dramas have splendid writers who can make you yearn to see a character return even if they belong to a unflattering series. They are plain magicians.

(The above story first appeared on LatestLY on May 24, 2022 10:00 PM IST. For more news and updates on politics, world, sports, entertainment and lifestyle, log on to our website latestly.com).