Kim Go Eun, Nam Ji Hyun, Park Ji Hu And Wi Ha Joon will play some of the key characters in the Korean adaptation of Little Women. While most of the Kdrama fans are very aware of the actors who have been cast here, we would still like to tell you a bit about these actors 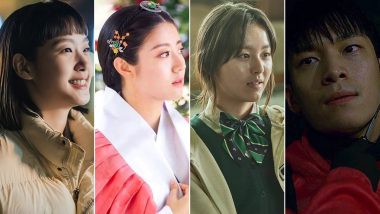 Little Women is getting a South-Korean adaptation and it will be streamed on Netflix from August this year. The film is based on Louisa May Alcott's 1868 novel by the same name. The book has many adaptations, recently being Greta Gerwig's 2019 movie. Saoirse Ronan, Emma Watson, Florence Pugh, Eliza Scanlen, Laura Dern, Timothée Chalamet, Meryl Streep starred in this film. For the Korean adaptation, the cast has already been announced. Kim Go Eun, Nam Ji Hyun, Park Ji Hu And Wi Ha Joon will play some of the key characters in the film. Crash Landing On You, Hotel Del Luna, Vincenzo - 5 Kdramas To Get An American Remake Soon.

Little Women talks about the four sisters of March family who are different in their temperament and wants from life but that doesn't dent their bonding. They fight poverty and overcome obstacles together.

Kim Go-Eun as Oh In Joo

Go-Eun will play the eldest sister from the family who is a writer and wishes to publish a novel of her own. There isn't anyone who isn't aware of this firebrand actress from SK. She rose to fame with Goblin where she played his teenage bride and also Cheese In The Trap. Go-Eun's innocence and fantastic comic timing are one of the key reasons Goblin has such a high recall value. She evolved as an actress with series like Tune In For Love and more. We do have our reservations about how she will portray Meg March's character who tries to be patient and suffer the perils of poverty with a brave face.

Nam Ji Hyun is the Jo March of SK's Little Women. She plays a feisty reporter who will always fight for the truth. Guess the narrative here changes as Jo March was a novelist in the book. Anyway, Nam Ju Hyun is a highly popular actress from South Korea. She has been part of Kdrama series like Suspicious Partner, What Happens To My Family? and more. It would be interesting to see how she plays this headstrong character.

Park Ji Hu will apparently play Amy, the jealous sister of the family who is always at a loggerheads with the second sister. Now where have you seen her? Well if you have watched All Of Us Are Dead, you would know who she is. All Of Us Are Dead, True Beauty, Hellbound - 7 Kdramas Based On Webtoons That We Recommend.

Reports suggests Wi Ha Joon has been cast opposite Nam Ji Hyun which makes us believe he would be the professor who initially critiques Jo's work but later becomes romantically involved with her. Wi Ha Joon is a popular face and has received global acclaim now after playing a detective in Netflix's hugely successful series Squid Game. But the actor is quite popular in South Korea for the versatility he brings to the table. While we are a huge fan of the bad boy Ha Joon in movies, the good-looking man also makes us skip a beat in series like Romance is A  Bonus book.

(The above story first appeared on LatestLY on May 26, 2022 10:28 PM IST. For more news and updates on politics, world, sports, entertainment and lifestyle, log on to our website latestly.com).