Lea Michele Apologizes To Glee Co-Star Samantha Ware For Making Her Time a 'Living Hell,' Gets Dropped From Endorsement Deal 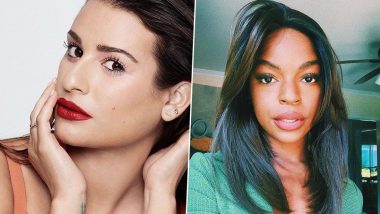 Los Angeles, Jun 3: A day after her "Glee" co-star Samantha Ware called out Lea Michele for making her time on the show a "living hell" and subsequently losing an endorsement deal for the same, the actor on Wednesday issued an apology for her behaviour. Ware accused Michele of making "traumatic microaggressions" towards her on the sixth season of the hit series, which even made her reconsider her decision to join Hollywood. After these allegations surfaced, meal-kit company HelloFresh dropped Michele as its brand ambassador. Seth Rogen Does Not Mince Words While Slamming Netizens Who Trolled Him For His 'Black Lives Matter' Post (View Pics).

In her apology shared on Instagram, the actor said while she does not remember making the specific remarks that Ware says she made, that is "not really the point".

"Whether it was my privileged position and perspective that caused me to be perceived as insensitive or inappropriate at times or whether it was just my immaturity and me just being unnecessarily difficult, I apologize for my behavior and for any pain which I have caused," Michele said.

The 33-year-old, who is currently expecting her first child with husband, entrepreneur Zandy Reich, said will keep working to be a better person so that she can be a "real role model for my child".

"I listened to these criticisms and I am learning and while I am very sorry, I will be better in the future from this experience," she added. Ware's remarks were in response to Michele's Twitter post supporting the Black Lives Matter movement amid the protests over the death of George Floyd, an African-American man who died in police custody in Minneapolis.

Following which HelloFresh issued a statement on Twitter on Tuesday saying the company doesn't accept any kind of racism, they have ended the contract with Michele, "effective immediately". A source close to Michele told People magazine that "the partnership was nearing its conclusion regardless".