Not Just Humans, Shah Rukh Khan Makes A Fan Out Of Humanoid Sophia Too - Watch Video

Sophia revealed that she is a fan of Shah Rukh Khan, when she was asked who is her favourite Bollywood star at the World Congress on Information Technology (WCIT) 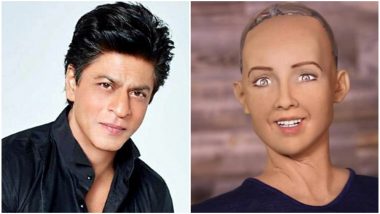 Shah Rukh Khan is a charmer all right! Even if some of his recent movies may not work as per expectations at the box office, there is no dent in Shah Rukh Khan's ever-increasing legion of admirers, both male and female, both in India as well as overseas. Recently Shah Rukh Khan made a huge impression at the World Forum in Davos, being a part of the Indian delegate that was led by Prime Minister. Many international celebs, like Hugh Jackman and John Cena recently, have expressed their awe for the Bollywood superstar. Now as he won over human beings, now add a humanoid to the list.

Sophia, the life-like humanoid, has been placing the entire world under its spell ever since it was unveiled. Now it has been winning more adulations at the World Congress on Information Technology (WCIT) that's happening here. it is also on this occasion that Sophia revealed that she is a fan of Shah Rukh Khan, when she was asked who is her favourite Bollywood star. Really, Mr Khan, tell us the secret of your charm that doesn't even spare even robots!

We have to say, @RealSophiaRobot has a good choice!

Well, when SRK learned about this, he had the apt and quite humble (even romantic) response to this.

Public declaration of love for a ‘lady’ who has come to my country, India. U Simulate me, every bit and byte of u, Sophia. https://t.co/HxAhTORpHD

Now do you have any doubts about SRK's mutant skills to charm the hell out of anyone?

On the movie front, Shah Rukh Khan will be seen next in Aanand L Rai's Zero, where he playing a vertically challenged man. Anushka Sharma and Katrina Kaif play the female leads in the movie that is scheduled to release on December 21 this year.

There are also reports that he might start work on the Rakesh Kumar biopic. A source told a leading daily, "SRK wants to start shooting in September and continue for two months before he starts promoting Zero, which releases on Christmas. After that, he will resume Salute’s shoot from January 2019. The film is expected to release next year." However, there is no official confirmation from King Khan himself.

Too busy making more fans out of humans and robots?

(The above story first appeared on LatestLY on Feb 20, 2018 09:30 PM IST. For more news and updates on politics, world, sports, entertainment and lifestyle, log on to our website latestly.com).