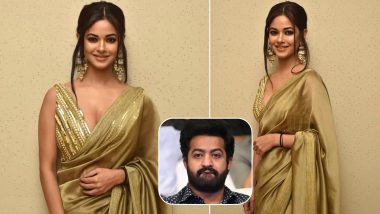 Actress Meera Chopra has been at the receiving end of totally unacceptable and nasty comments on social media and that too for a trivial reason - she is not a Jr NTR fan. In an online interaction on Twitter, when Meera was asked about Jr NTR, she simply stated that she does not know him and is not a fan. She also went on to answer another question and revealed that she is a Mahesh Babu fan. And all hell broke loose. Priyanka Chopra and Nick Jonas are Giving Relationship Goals to the World, Says Cousin Meera Chopra.

The actress was incessantly trolled by Jr NTR fans and while trolling is something actors are used to, given their industry and profession, these trolls took no time to turn into nasty rape threats. Meera did not take the episode lying now (no one should) and went on to call out the trollers. In fact, she even tweeted to Jr NTR, bringing to his notice the kind of slurs and threats that his fans had subjected Meera and her family to. Section 375 Actress Meera Chopra Buys a 3-BHK Apartment in Andheri, Lokhandwala.

Check Out Her Tweets Below:

A Tweet Attacking Her Parents That Meera Brough To The Notice of The Police:

This is a deleted tweet by @ntrbheem9999. Attaching the screenshot. @hydcitypolice @CyberCrimeshyd i would like to report this person and various otjer abusive and death threatning tweets on my timeline. @twitter i request you to suspend this account! https://t.co/RT908ABMMD pic.twitter.com/Fi7Rh4O7el

Thanks, will do it https://t.co/J8itYFCKyq

We Agree, Such Toxic Social Media Accounts Need To Be Pulled Down:

Iam not the one to get scared of their threats. This is a social issue, not a petsonal one now. they r openly threatning, abusing and even discussing rape. His fan clubs need to ne pulled down. Thanks fr the support. Ill be in touch! https://t.co/cgMTgHv79l

Well i didnt know not being somebodys fan was a crime.. i want to say this loud to all the girls that if you are not a fan of @tarak9999 , u could be raped, murdered, gangraped, ur parents could be killed as tweeted by his fans. They r totally spoiling the name of their idol.

A few fans lashed out at Meera for tagging Tarak in her 'Stupid' posts. To this, she clarified that all she wants to do is bring this nonsense to the actor's notice. She also stated that Jr NTR should ask his fans to behave.

I have all respect for him as an actor. The only reason iam tagging him is bcoz he should know how his fans behave. And its his responsibility to address them and ask them to refrain from such hooligism. https://t.co/NfnyuLsRUi

While it is okay for fandoms of actors and actresses to go to war over social media, it is completely not okay for them to issue rape and murder threats. And only strict action taken against offenders will set an example for the others who use the anonymity of the internet to troll and shame others. While stars are accustomed to trolls, threatening them with their life and attacking family members is a huge crime. These trolls need to place themselves in the place of actors and decide if they'd appreciate such behaviour.

(The above story first appeared on LatestLY on Jun 03, 2020 11:03 AM IST. For more news and updates on politics, world, sports, entertainment and lifestyle, log on to our website latestly.com).