Queen is directed by Gautham Menon and the series would be streamed on MX Player. It is said to have 11 episodes, highlighting the different phases in the late CM Jayalalithaa's life. 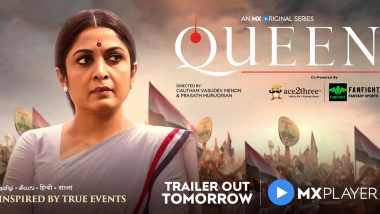 Fans of Ramya Krishnan were amazed when it was confirmed that she is making her digital debut. After making a strong impact in films, Ramya is all set to enthrall the audience in the digital space. Ramya is making her digital debut with the web-series Queen, based on the life late Chief Minister Jayalalithaa. It was just few days ago when the makers had dropped the teaser, but her face wasn’t shown. Ahead the release of the trailer, the makers of Queen have released a new poster unveiling Ramya Krishnan’s look as young Jayalalithaa, and we must say, she is looking impressive! Queen: Ramya Krishnan to Play the Role of Late CM Jayalalithaa in Her Digital Debut; Trailer to Be Out on December 5.

In this first look of Queen featuring Ramya Krishnan as young Jayalalithaa, she is seen wearing a white saree with red and blue border, teamed with a matching blouse. The Baahubali actress looks fierce in the avatar of former Tamil Nadu chief minister. Fans are eagerly waiting to see Ramya in the digital space. “A woman who redefined her destiny and became the people’s, QUEEN,” reads the caption of Queen first look poster. Kangana Ranaut’s Thalaivi in Legal Mess, Madras HC Gives Jayalalithaa’s Niece, Deepa, Permission to Sue the Makers.

A woman who redefined her destiny and became the people’s, QUEEN.

Queen is directed by Gautham Menon and the series would be streamed on MX Player. It is said to have 11 episodes. Three stages of Jayalalithaa’s life would be shown in this web-series. The phase when she was a school student, then her journey as a heroine and then on becoming the youngest chief minister. The trailer of Queen would be out tomorrow, December 5!

(The above story first appeared on LatestLY on Dec 04, 2019 02:59 PM IST. For more news and updates on politics, world, sports, entertainment and lifestyle, log on to our website latestly.com).