2.0 Box Office Collection: Area-Wise Breakdown of How Much Rajinikanth and Akshay Kumar's Film Earned On Its Opening Day! 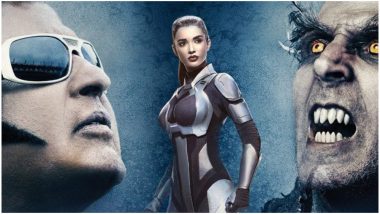 It is no surprise to us that Rajinikanth and Akshay Kumar's film, 2.0, has taken off to a flying start at the box office, and even rewriting box office records in the process. With the promise of being a visual extravaganza and the combined star power of the two leads, not to mention the Rajinikanth mania, 2.0 is doing tremendous business in India, as well as overseas. Especially in the South, that is the stronghold of Rajinikanth. 2.0, directed by Shankar, has made some huge records in its opening day collections, especially with its collections in Chennai and Andhra Pradesh/Telangana, as per trade analyst and industry watcher, Ramesh Bala (whose tweets on these have been included below). 2.0 Box Office Collection Day 1: Rajinikanth- Akshay Kumar Starrer Takes off to a Flying Start.

Even the Hindi version has done well in the Northern parts of the country, as 2.0 is estimated to have collected Rs 25 crore in this version. Overall, 2.0 is said to earned more than Rs 60 crore in India on its opening day. We have to add here that the figures that we are quoting in the article are pure estimates as we are yet to get any final figures. 2.0: After Tamilrockers Leak The Film, The Producers of Rajinikanth and Akshay Kumar's Film Are Asking For Your Help - Read Tweet.

Actuals may be higher..

Going by the above figures, 2.0 can easily go beyond the Rs 250 crore mark over the extended opening weekend worldwide (The movie came out on a Thursday). However, there is still a lot of work to do. With a budget of about Rs 600 crore, 2.0 has to earn more than Rs 700 crore at the box office to even earn profits. So the business in the week ahead is crucial.

(The above story first appeared on LatestLY on Nov 30, 2018 01:22 PM IST. For more news and updates on politics, world, sports, entertainment and lifestyle, log on to our website latestly.com).