Bollywood actress Kriti Sano has been roped in play the role of Sita in Adipurush. The makers announced the big news on Friday (March 12) morning. Not just this, as actor Sunny Singh has been chosen to play Laxman in this Prabhas and Saif Ali Khan film. Check out the full story. 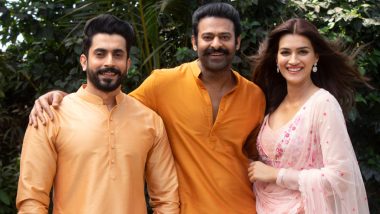 If you are the one who was wondering who will play Sita opposite Prabhas in Om Raut's Adipurush? Then the official answer is here. As it's Bollywood actress Kriti Sanon who has been roped in play the role of Sita in the magnum opus. The makers announced the big news on Friday (March 12) morning. Not just this, as actor Sunny Singh has also been chosen to play Laxman in the film. The director took to his social media and posted a picture of the new stars on board. Adipurush: Kriti Sanon to Play the Role of Sita in Prabhas and Saif Ali Khan’s Magnum Opus?

Earlier, a few reports had claimed that Kriti and Sunny are the ones who will be playing the role of Lord Ram's wife and brother respectively in the film. And here comes the official confirmation regarding the same. Well, it will be really interesting to see how the movie will fare at the box office (once out) as the cast looks indeed amazing. The flick also stars Saif Ali Khan as Prabhas' arch-nemesis. Adipurush: Sunny Singh to Portray the Role of Laxman in Prabhas and Saif Ali Khan’s Film?

Meanwhile, Adipurush is undoubtedly one of the biggest Indian films in the coming year wherein the audience will get to see something never seen before. The movie is rumoured to snatch the August 11, 2022 release date. The film is currently on the floors and will be released in Hindi, Telugu, Tamil, Malayalam and Kannada. Stay tuned!

(The above story first appeared on LatestLY on Mar 12, 2021 09:25 AM IST. For more news and updates on politics, world, sports, entertainment and lifestyle, log on to our website latestly.com).