Ajith Kumar celebrates his 50th birthday today and we celebrate it by putting together eight throwback pictures of the actor that will always be special. Starting from a major picture of Ajith and his wife Shalini with Michael Jackson to his journey as a Formula 2 race driver. Have a look. 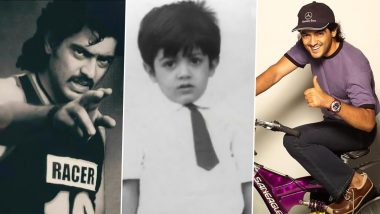 Ajith Kumar aka Thala Ajith celebrates his 50th birthday today. He is one of the biggest stars in the Tamil industry, having debuted in 1990 with En Veedu En Kanavar in a minor role. Till date, he has featured in more than 50 movies. He is the recipient of several honors which includes three Cinema Express Awards, four Vijay Awards, three Tamil Nadu State Film Awards and three Filmfare Awards South. He introduced himself as a romantic hero with Kadhal Kottai (1996), Kadhal Mannan and Aval Varuvala (1998). Ajith earned wider recognition and fame with his dual role act in a vigilante film Citizen (2001). He also starred in the high-grossing Tamil film of all-time Mankatha (2011), where he portrayed the role of an antihero. Ajith Kumar Birthday: 5 Things That Make Thala the Most Favourite Superstar of Tamil Cinema!

Apart from his acting career, he is a motorcar racer with various records. He participated in the MRF Racing Series in 2010. He is one among very few Indians to race in the International sphere and Formula championships. Also, the Viswasam actor enjoys a huge fan following on his social media handles. Ajith is married to actress Shalini, and is a father of two children. Ajith Kumar Birthday Special: From Mankatha to Nerkonda Paarvai, 7 Best Films of Thala Ranked As per IMDB Rating (LatestLY Exclusive).

On the occasion of his birthday, let's take you on a pictorial trip of Ajith Kumar's life with some throwback pictures:

One From Ajith Kumar's Wedding Day...

Can You Recognise Ajith Kumar From His School Day's Photos...!!

Ajith is a certified Formula race driver! He is ranked number 3 in India at his peak! IT is an incredible record as he is one of the best drivers of Forumla 2.#Valimai#ThalaAjith#28YrsOfSELFMADETHALAAjithpic.twitter.com/szXqttVcZI

On the work front, Ajith will be next seen in an upcoming action-thriller titled Vaalimai. The film is helmed by H Vinoth and produced by Boney Kapoor. It was earlier scheduled to release on 2020, but got postponed due to COVID-19 pandemic. However, till now the  makers have not revealed the fresh release date of the film. We wish this immensely lovable actor Many Many Happy Returns of the Day!

(The above story first appeared on LatestLY on May 01, 2021 08:41 AM IST. For more news and updates on politics, world, sports, entertainment and lifestyle, log on to our website latestly.com).