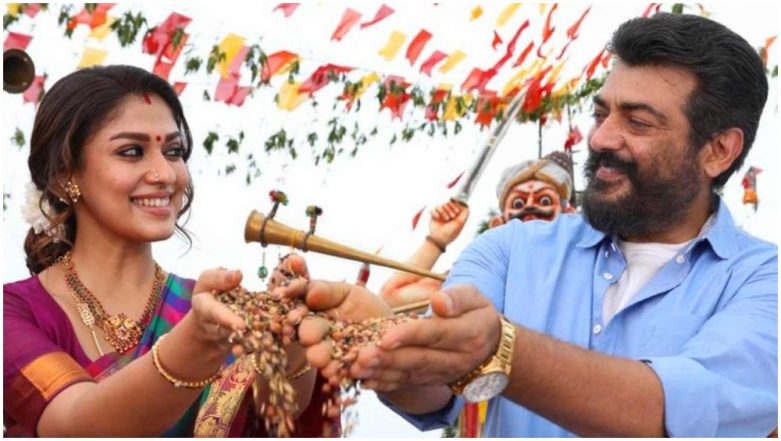 When your stardom is in great form, it hardly does matter that your movies rarely get great reviews. They are bound to rock at the box office anyway. Ajith Kumar is having that kind of time for the past few years. His last few releases may not have won over the critics, but that hasn't stopped them from turning out to be huge hits. Like his last film, Viswasam. Viswasam was directed by Ajith's favourite film-maker Siva, and their collaborations in the past - Veeram, Vedalam and Vivegam - were all blockbusters. Nayanthara is the female lead in Viswasam. Viswasam vs Petta: Thala Ajith’s Film Is Ruling the Tamil Cinema While Rajinikanth Starrer Shines Overseas

Viswasam had released on Pongal this year. It was competing with Rajinikanth's much-hyped Petta, that was directed by Karthik Subbaraj. Despite Petta having an ensemble cast and getting better reviews, it was Viswasam who had an upper hand at the Tamil Nadu box office. While both movies are certified hits, Viswasam beat Petta in getting better collections in the state. Viswasam is also performing well at the overseas box office too.

Now as per a tweet from industry tracker Ramesh Bala, Viswasam is now the second highest grossing film in Tamil Nadu. It has beaten the collections of Rajinikanth and Akshay Kumar's sci-fi thriller, 2.0, in the process to take that position. The numero uno spot is still owned by SS Rajamouli's multilingual Baahubali 2. Viswasam Fever! Thala Ajith Fan Sets Father on Fire After Denying Money to Watch The Movie.

However, Ramesh Bala has not divulged the final collections of Viswasam to determine by how much Ajith's film has beaten 2.0, or even Petta, by. This brings us back into the debate on how the production houses and trade analysts are giving out various box office collections for every film, making it really difficult for us to track the business any movie has done.