Amala Paul Birthday: From Mynaa To Aadai, Here’s Looking At Some Of The Best Roles Of This South Beauty!

Amala Paul is one of the popular actresses of South Cinema. She has worked in Malayalam, Tamil and Telugu films as well. 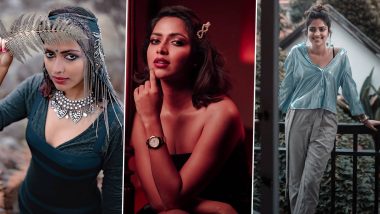 Amala Paul is one of the popular actresses of South Cinema. She has worked in Malayalam, Tamil and Telugu films as well. This young, gorgeous actress had made her acting debut with the Malayalam film Neelathamara in 2009. It was a supporting role that she had played in this movie. However, it was the following year with the film Mynaa that Amala shot to fame. Amala Paul Birthday Special: She Seeks Inspiration from Boho Fashion and Blends it With Her Casual Style (View Pics).

Amala Paul’s modelling portfolio was noticed by filmmaker Lal Jose who then offered her a role in Neelathamara. She then went on to sign a few Tamil films. On the occasion of her birthday, let’s take a look at the films in which her roles became prominent. Vishnu Vishal Is All Praises For Ratsasan Co-Star Amala Paul, Says ‘You Are The Best At Your Work’ (View Pics).

Mynaa – The rom-com released in 2010 was helmed by Prabhu Solomon. Starring Vidharth and Amala Paul in the lead, the latter played the titular role. She was seen as a simple village belle and her work received positive praise from critics.

Ithu Nammude Katha – This Rajesh Kannankara directorial is a remake of the hit Tamil film Naadodigal. She had played the character Aishwarya and it was a supporting role.

Deiva Thirumagal – Written and directed by AL Vijay, it featured Chiyaan Vikram in the lead as a mentally challenged adult. She played the role of a school correspondent Swetha Rajendran and her performance was lauded by the audience.

Thalaivaa – Amala Paul was seen opposite Thalapathy Vijay in this action entertainer. She played the character ACP Meera Narayanan, a crime branch officer.

Aadai – The 29-year-old actress played the character Sudhandhira Kodi aka Kamini, who is spontaneous and courageous. Her role in this Tamil thriller had opened to positive reviews.

These are some of the films in which Amala Paul’s role was lauded by critics and fans. She is indeed one of the finest actresses of South Cinema. Here’s wishing this beauty a very happy birthday and a great year ahead!

(The above story first appeared on LatestLY on Oct 26, 2020 10:00 AM IST. For more news and updates on politics, world, sports, entertainment and lifestyle, log on to our website latestly.com).