Bheeshma Parvam Ending Explained: Decoding the Climax of Mammootty-Amal Neerad’s Film and How It Brings Michael’s Saga to a Close (SPOILER ALERT) 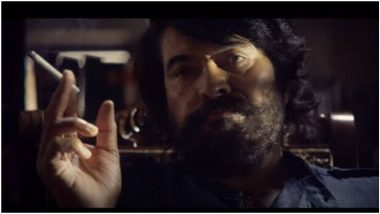 Bheeshma Parvam marks the second collaboration of director Amal Neerad and megastar Mammootty after the 2007 hit, Big B. The movie is inspired by the Mahabharata, as the title suggests, and also by the classic Hollywood gangster film, The Godfather. Bheeshma Parvam is set in the '80s and revolves around a predominantly Christian powerful family called Anjootti. Michael, played by Mammootty, is the head of the family and a lifelong bachelor who has dedicated himself to keep his clan together. His word is the law there. The only problem is not all of his family members care for his iron-fisted but concerned-parent rule, and they devise ways to get him out of the way. Bheeshma Parvam Movie Review: Mammootty’s Invincible Swag Provides Some Cheer in Amal Neerad’s Predictable Mashup of Mahabharata and The Godfather.

So how does it end? Do Michael's enemies manage to get him out of the way? Or does the invincible Michael manage to take them down and live to tell his tale another day? In this feature, let's deconstruct the bloodied finale of the crime saga and compare it with its obvious inspirations. Of course, let's warn you, major SPOILERS ahead!

Before we go ahead, I would like you to recollect as much as you can about the Hindu epic The Mahabharata, especially Bheeshma's story, and The Godfather. Done? Good. Let's proceed. So Michael is the 'Bheeshma' of his family, an invincible man, in his own words, trying to keep his disjointed family together (the Christian section of his family don't see eye-to-eye with their Muslim relatives), and failing badly at that. Thanks to the support of the 'outsider' Rajan (Sudev Nair), and the machinations of other evil relatives, his nephews Peter (Shine Tom Chacko) and Paul (Farhan) kill the good nephew, Ami (Sreenath Bhasi). With Ami's angry elder Ajas (Soubin Shahir) baying for the blood of the killers, it looks like Anjootti clan is all set to have its own Kurukshetra war.

The only difference is that here the Kauravas send their benevolent grand old uncle to the Pandavas' side, when with the blessings of Peter and co, Rajan sends his men to kill Michael. In the Mahabharata war, Arjuna places Shikhandi in front to attack and take down Bheeshma, knowing that Bheeshma won't take weapons against a transgender. Here, the lines between Kauravas and Pandavas get blurred, as it is the villains who try to kill Michael.

Instead of Bheeshma being showered with a hail of arrows, Michael is stabbed and cut with knives, though he, unlike Bheeshma, fights back at his assailants. If Bheeshma lay on a bed of arrows until the end of war, Michael has his hospital bed, after barely managing to survive the lethal attack on him. But he survives, and doesn't wait for Uttarayan to die, unlike his mythological counterpart.

After he is brought down, Bheeshma teaches Yudhishthira Vishnu Sahasranama and on how to become a good king from his bed of arrows. Here, Michael mentors Ajas into bringing down the killers of his brother, with the film taking strong inspiration from the iconic baptism scene from The Godfather. Ajas takes down his opponents both in violent and non-violent ways, while Michael keeps his hands clean from the blood of his own kin. The three deaths that happen, happen for a reason.

Here, there are some interesting parallels to note. Michael's brother-in-law the sleazy and abusive Martin (Harish Uthaman) is a standin for Carlo from The Godfather. Carlo, the son-in-law of Don Corleone and a wife-beater, had a hand in the death of his elder brother-in-law, Sonny Corleone, though that is only revealed later, resulting in other brother-in-law Michael Corleone killing him in the end. Carlo's wife, and Michael's sister is never told of this, which is why she was angry with her brother.

In Bheeshma Parvam, our Michael, who is both Don Corleone and Michael Corleone) learns that Martin may have a hand in killing of his brother Paily and friend Ali. Which is why he arranges for Ajas to kill Martin first by ramming his truck against Martin's police vehicle. But Michael does inform his sister Susan (Lena) and Martin's wife in advance of what he is about to do.

I believe Michael would have spared Peter and Paul both, but he allows Ajas to kill Peter to quench his vengeance. Michael tells a scared Paul, he had to request Ajas to spare his life. He also tells Paul to take his parents and leave for Rameshwaram, and not to return to Kochi ever again.

This is another interesting Mahabharata allegory where Paul became Yuyutsu,  the only Kaurava to survive, though Yuyutsu was generally a good guy. Also in the epic, Kaurava's parents Dhritarashtra and Gandhari leave for vanaprastha after Kurukshetra war, unable to bear the losses of their children. In the movie, Paul's mother Molly is shown wearing dark shades due to her cataract surgery, while the father Mathai is someone who is voiceless and spineless in front of his kids and Michael.

Also interesting is how Peter dies. In what becomes like a duel between Peter and Ajas, reflecting Duryodhana-Bhima's final fight in Mahabharata, Peter almosts beats Ajas before Ajas makes a car slide on Peter, getting the latter crushed under it. In Mahabharata, even Duryodhana nearly had a winning edge over Bhima, before the latter sneaks a hit below the waist of his opponent and then crushing his legs.

The main antagonist, Rajan Nair, is an amalgamation of Karnan and Shikhandi from Mahabharata and Sollozzo from The Godfather. There is also a real-life inspiration for his character - real-life Mumbai based gangster Rajan Mahadevan Nair aka Bada Rajan. While the real Bada Rajan got killed in 1983, the fictional one managed to survive till 1988 only to die from a barrage of bullets from Michael's men. Not to mention he was betrayed by his own associate who does so complying orders from their bosses in 'Bombay', which means Michael has strong connections with the D-Company as well. Bheeshma Parvam Movie Review: Mammootty’s Film Directed By Amal Neerad Gets A Thumbs Up From Netizens!

Interestingly, Bada Rajan, who was incidentally killed on the supari arranged by another Malayali gangster Abdul Kunju, was the inspiration for another yesteryear Malayalam classic, Abhimanyu, which was directed by Priyadarshan and starred the other big M of Malayalam cinema, Mohanlal.

As for the other two villains, Dileesh Pothan's James and Jinu Joseph's Father Simon are arrested for their past misdemeanours. Though this makes us wonder why Michael, the do-gooder that he is, never took action against them before despite having knowledge about them. Especially Simon, who had sexually assaulted a minor.

After killing Rajan, Michael goes to meet Rajan's vindictive grandparents, who had been poisoning their grandson's ears for years to take revenge on Michael for killing his father and their son. Michael tells them to change their ways for good till their deaths, or he will come to lay wreath on their bodies. The uncomfortable part here is that the grandparents are played by KPAC Lalitha and Nedumudi Venu, both of whom passed away before the release of the film. So this scene made for a troubling, unintentional foreboding that does hurt us, who are still grieving the demises of the actors.

Recalling back to our 'Baptism section, Bheeshma after passing knowledge to Yudhishthira passes away on Uttarayan. In Bheeshma Parvam, Michael doesn't die but has passed on his baton to Ajas, who now occupies Michael's seat of power and listens to victims who need justice from them, thus reflecting the intro scene of Michael at the start of the movie. Michael, meanwhile, now overlooks his happy family, now reduced after he cut out the cancerous parts.

So how did you find Bheeshma Parvam? Share your thoughts in the comments section below.

(The above story first appeared on LatestLY on Mar 04, 2022 08:04 PM IST. For more news and updates on politics, world, sports, entertainment and lifestyle, log on to our website latestly.com).