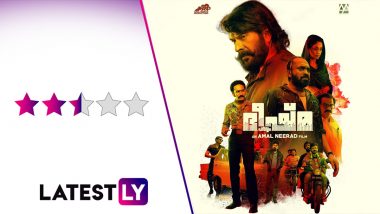 Bheeshma Parvam Movie Review: By now you know what to expect from an Amal Neerad movie. Hyper-stylish slo-mo shots, superstar cast, innovative camera angles, technical brilliance, some effective massy punches and err... some very heavy 'inspirations'. Expect all these and then some more of those in his latest, Bheeshma Parvam, streaming now on Disney+ Hotstar, where he reunites with megastar Mammootty after 2007's Big B. Bheeshma Parvam is a typical Amal Neerad film that would keep his and Ikka's fanboys happy, just like you say for a Zack Snyder movie. Whether that film appeals to a normal movie-goer or not, is a different matter. It did for me to some extent, and then it didn't. Bheeshma Parvam Movie Review: Mammootty’s Film Directed By Amal Neerad Gets A Thumbs Up From Netizens!

My one grouse is not getting to watch that one good masala mass movie in Malayalam movie for a long time. Like say, Big B, Amal-Mammootty's last collaboration. An official remake of the Hollywood film Four Brothers, Big B was a fun watch that hits all the right mass notes when needed, even if Amal goes overboard with the slo-mo shots. However, some of the recent superstar vehicles have been true disappointments, with the other big M serving back to back travesties very recently.

Bheeshma Parvam, for the matter, is one of Mammootty's better mass movies in the last few years. However, that superlative comparison is merely marginal. Bheeshma Parvam preps you up for something huge and fancy, and then serves you the cold kanji that you are used to having on a daily basis.

As the name suggests, the movie is inspired by Mahabharata, seen through the character of Bheeshma. It is also inspired by Francis Ford Coppola's The Godfather. For a change, Amal Neerad has been very open about his inspirations, giving the authors credit in the opening slate. He didn't mention Sarkar, though, the Hindi film directed by RGV that itself is a remake of The Godfather, from where Amal borrows a couple of sequences. Also, Prakash Jha's Raajneeti, that was a memorable film that blended Mahabharata with The Godfather.

Bheeshma Parvam is set in the '80s. Is it for nostalgia's sake (Malayali's favourite movie trope these days) or just for visual aesthetic, I am not clear on this. Moving forward, so in Amal's take on Mahabharata-meets-The Godfather, Hastinapura/Corleone clan is Anjootti, a huge predominantly Catholic family in Kochi with most of the residents staying in a palatial mansion. This clan is headed by Michael (Mammootty), a lifelong bachelor who is doing his best to keep the clan together, including a section of his Muslim relatives, which has his adopted nephews Ajas (Soubin Shahir) and Ami (Sreenath Bhasi). Bheeshma Parvam Ending Explained: Decoding the Climax of Mammootty-Amal Neerad’s Film and How It Brings Michael’s Saga to a Close.

He commands respect from all of his family members, but not in the same measure. There are some like his nephews Peter (Shine Tom Chacko) and Paul (Farhaan Faasil) who feel that Michael is more partial to their Muslim relatives and is killing their own ambitions. With the arrival of Rajan (Sudev Nair) a Mumbai-based gangster who has a life-long grudge against Michael, Michael's detractors now believes they have a chance to end his autonomy once and for all.

Bheeshma Parvam is never shy about establishing its influences in the narrative. Michael's intro sequence where he listens to two women narrate a honour killing crime parallels Don Corleone listening to the baker in The Godfather. It is also established that he is celibate like Bheeshma, who is living according to his father's dying wish to keep the family together and even proclaims that only he can decide when he dies. As we get to know all the family members, we know who they represent in the Mahabharata and the Corleone saga. Some very obvious and heavy-handed, like Maala Parvathi's Molly, the mother of Paul and Peter, who has to wear dark shades throughout due to a cataract surgery.

Sometimes, characters take on two Mahabharata personas. Like, for example, I felt Ajas was both Yuddhisthira and Arjuna. Even Rajan felt like an amalgamation of Shikhandi and Karnan. As someone who thoroughly loves reading Mahabharata and rewatching The Godfather, I just loved to draw parallels with the characters in Bheeshma Parvam with these sagas. This made for a very entertaining first half that exists to be a setup for a bloody, revenge-fuelled second half.

In between, Amal sprinkled some punch scenes of Mammootty's that I enjoyed so much that I joined his fans in their claps and cheers. The first proper action sequence where Michael goes to save his wayward Carlo-esque brother-in-law (Harish Uthaman) was uber-stylishly shot with smart camera-work (cinematography by Anend C Chandran) and even smarter action choreography (Supreme Sundar). The intro of Rajan near the interval, which also brings in the late Nedumudi Venu and KPAC Lalitha's characters in the mix, sets the stage for an exciting second half. KPAC Lalitha Dies at 73; Veteran Malayalam Actress Was a Two-Time National Award Winner.

Hereon, the movie became quite flat, despite the storytelling actually getting into its groove. Well, when you make your screenplay depend on two very well known stories, one problem you can't avoid is predictability. And that becomes Bheeshma Parvam's Pradyumna Chakra, from which it, like the doomed Abhimanyu, couldn't seek an escape. Many of the major twists, including a couple of major deaths, could be smelt from a mile away. Michael's fate in the third act reflecting that of Hastinapura's grand old man's final turn in the Kurukshetra war could have been a nice analogy. Except it felt that it lacked the substance to pull off (a problem when Amal goes massy) and turns very much heavy-handed in its parallel-drawing (a character even refers to Uttarayan). The lumbersome pacing is also a problem.

The payback finale only passes muster and occasionally even brings to question Michael's otherwise silent stances in the past on some of his family members' dubious actions. I mean, if he knew that one of his kin was a sexual assaulter, why was he silent all along?

Even more disappointing is how most of the characters, after some interesting setups, don't elevate themselves to being well-rounded ones. Like for example, Peter made for an interesting villain, the Duryodhana of Anjootti clan, who also borrows Kay Kay Menon's character traits from Sarkar. The movie slyly hints Peter, who is a movie producer, might harbour sexual feelings for the hero of his movie. But that thread is left askew, and so is the track of him abusing his wife. Similarly, even the good characters like Ami and Ajas felt like characters with good packaging but shallow material inside. Why even Michael felt like a half-hearted attempt at writing a mass character. I am still not sure what makes his persona tick enough to feel relevant, keeping aside all the slo-mo (which like most Amal Neerad movie, save for Varathan, begins to play with your patience after some point).

The female characters get even weaker treatment. But then that has been a problem with the director's movies in the past as well. In his hyper-stylised testosterone-driven sagas, the women are either victims or mere witnesses to when the men are indulging in destroying themselves. The women in Bheeshma Parvam fare no different, either victims of their spouses, like Lena and Veena Nandakumar's characters, or being a romantic interest, like Anagha's. Or being an unrequited love, like Anasuya Bharadwaj's, who was once in love with Michael.

Yet, if some of the characters do leave an impact, it is mostly for the sturdy performances. If I have to single out a few standout acts, the first to come to my mind is Shine Tom Chacko who pitches a despicable act as the brash Peter. While he has less scope in the first half, Soubin Shahir truly shines in the second half. The actor continues to surprise me with his every movie, and this time, the surprise is loaded with some awesome moonwalks and fights! Sreenath Bhasi leaves an impact as the dashing Ami. Sudev Nair made for a charming villain, but I was disappointed with how his character was written out.

Felt a twinge of sadness seeing Nedumudi Venu and KPAC Lalitha here, and winced uncomfortably, with Michael's parting line for their characters. Wondering if that could have been edited out, considering the context of the scene and their unfortunate demises before the film's release.

As for Mammukka, the man is a God of Swag, and it is absolutely incredible how he effortlessly maintains that even when he has now touched 70. His magnifique personality and his towering screen-presence help in building Michael into a formidable figure, loaded with some good punchlines. Michael, however, might not reach the same cult level as Big B's Bilal, but Mammootty's effortless act does the needed work here.

Sushin Shyam's score is decent enough, with "Parudeesa" a strong standout, both in terms of music and choreography. However, the BG score is inconsistent in terms of impact and also needlessly intrusive in certain scenes where it is not needed. Like, in the sequence where the Anjootti family gather together after they find out about Ami and Rachel (Anagha).

- A Decent First Half

- The Second Half is Weaker

- Excesses of Amal Neerad's Slo-Mo, Especially in the Third Act

- The Influences Make It Highly Predictable

Considering Amal Neerad has been getting better and better as a director since his Kullante Bharya short in Anchu Sundarikal, Bheeshma Parvam felt like a setback just like his last directorial, Trance, ambitious but overdone. It appeals well enough to Mammootty fans and the director has a strong grasp on the proceedings in the first half. But the movie gets drowned in the stylized heavy-handedness, self-indulgent treatment and its very familiar inspirations.

(The above story first appeared on LatestLY on Apr 01, 2022 10:37 AM IST. For more news and updates on politics, world, sports, entertainment and lifestyle, log on to our website latestly.com).