Peter Paul's ex-wife has issued a legal notice against him demanding more money to support their two kids but Vanitha Vijayakumar is unperturbed by it. 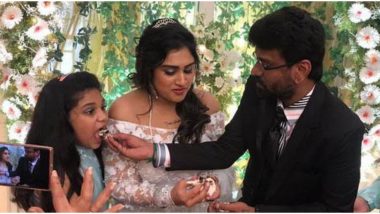 Tamil Bigg Boss season 3 fame Vanitha Vijayakumar got married to fiance Peter Paul in Chennai on June 27. The couple had a rather intimate wedding ceremony with only close friends and family in attendance. The pictures of the happy couple from their special day even went viral on the internet but things took a rather sad turn when his first wife issued a legal notice to him. Though Peter and his former wife, Elizabeth are divorced, the latter claimed that she wants him to continue supporting their two children. Bigg Boss Tamil Season 3 Fame Vanitha Vijayakumar Marries Peter Paul - Check Out their Happy Pictures.

When Galatta.com got in touch with Vanitha to get her reaction on the same, she simply said, "My husband Peter and his first wife have been separated for over 8 years now and he has already given all necessary financial support for her and their 2 children but she is now creating an issue to sensationalise and demand more money.” Apparently, his ex-wife is demanding a sum of Rs 1 crore to raise their children but Vanitha is unperturbed by her demands. She insists that she's busy celebrating her new life with Peter and they aren't worried about his ex-wife's legal notice. She's letting her lawyers deal with this issue legally.

Earlier Vanitha had introduced her fiance to her admirers on social media by saying, "He (Peter) walked out of my dream into my life. He filled the void I never knew existed.  Surprisingly I felt secure and complete around him. He stepped in as a friend and helped me when I was lost without any technical help and support for my YouTube channel during the lockdown.  He made things happen in such a way that I was at ease, so calm, stress-free and felt taken care of. You all know my children have been my priority always. When he asked for my hand in marriage, I was speechless. (Deep inside I was screaming yes though). Peter Paul is a filmmaker by profession and a  simple, caring, loving and honest human being who stole my heart and made me fall head over heels in love with him. The rest you will come to know of his projects on screen very soon."

Vanitha also has two kids from her previous marriage.

(The above story first appeared on LatestLY on Jun 28, 2020 09:26 PM IST. For more news and updates on politics, world, sports, entertainment and lifestyle, log on to our website latestly.com).