Dileep's accomplices, according to Blalachandran had said that they would have to spend Rs 1.5 crore for this. Balachandrakumar made the deposition before a magistrate's court along with a few audio recordings he had made at Dileep's residence. 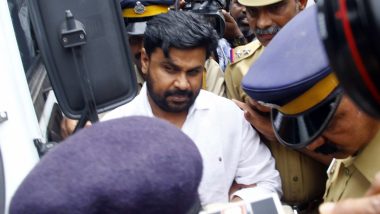 Interrogation of Malayalam actor Dileep and the others accused in a case related to hatching a conspiracy to attack the investigating officials in the actress abduction case started for the second day at the Crime branch office near here. The Kerala High Court on Saturday had directed Dileep and four of his associates, including his brother, brother-in-law and two friends, to appear before the Kerala Crime Branch for three days starting Sunday for questioning. Dileep Visits the Crime Branch Office for Second Day of Questioning in a Case on Sexual Assault of an Actress.

On Sunday, the actor and the others left the crime branch office after 8 p.m. Likewise, on Monday, the actor along with his brother and brother-in-law arrived in the same car for interrogation at 8.45 a.m. The court, in its interim order on Saturday, said the accused should not be arrested till January 27 and that they can be interrogated for three days from January 23 from 9 a.m. to 8 p.m. Actress Assault Case: Crime Branch Interrogates Actor Dileep for 11 Hours, Will Continue Tomorrow.

It also directed the prosecutor to place before it a report on the interrogation on January 27. Apart from Dileep, his brother Anoop, brother-in-law Sooraj, his aide Appu, alias Krishnadas, and close friend Byju Chengamanad are those being interrogated. The questioning is being led by Crime Branch Superintendent of Police C. Mohanachandran.

Popular for playing the comic roles on screen, Dileep has been in the news for the wrong reasons after a frontline South Indian heroine complained that she had been abducted and sexually assaulted by a gang of goons in 2017 and certain scenes were filmed to blackmail her. After the main accused Sunil was arrested and questioned, the prosecution charged Dileep with being the main conspirator in the case. Dileep was arrested and jailed. He spent two months in prison before getting a bail and the trial is on.

Recently, a former close associate of Dileep, Balachandrakumar, a movie director who had fallen out with the actor, revealed that Dileep had conspired to teach the investigating officer "a lesson". He had alleged that Dileep, while watching a YouTube video of the then Superintendent of Police A.V. George in relation with the case, had spoken about "teaching a lesson" to the officer and engaging rowdy elements for it. Dileep's accomplices, according to Blalachandran had said that they would have to spend Rs 1.5 crore for this. Balachandrakumar made the deposition before a magistrate's court along with a few audio recordings he had made at Dileep's residence.

(The above story first appeared on LatestLY on Jan 24, 2022 12:43 PM IST. For more news and updates on politics, world, sports, entertainment and lifestyle, log on to our website latestly.com).