Dileep is one of the finest actors of Malayalam Cinema who has done a varied range of roles in his acting career. 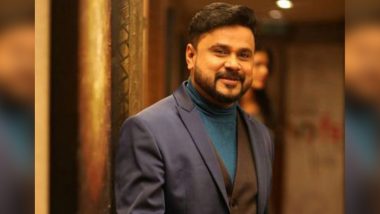 Dileep is one of the finest actors of Malayalam Cinema who has done a varied range of roles in his acting career. He is mostly known for playing comedy roles, however, he has also managed to pull off intense roles with sheer brilliance. It has been more than three decades since Dileep has been a part of the film industry and throughout these years the actor has given numerous blockbusters. Often known as ‘Janapriya Nayakan’, the actor has been showered with heaps of love and thoughtful messages on Twitter. Malayalam Actors Dileep-Kavya Madhavan’s Daughter Mahalakshmi Turns 1, Superstar Shares a Perfect Family Pic on Facebook.

Some of the popular films of Dileep include Meesha Madhavan, Kunjikoonan, Chanthupottu, C.I.D. Moosa, Two Countries, Ramaleela, among many others. Besides fans, even some of the celebs have wished the actor. Suresh Gopi shared a birthday post for Dileep that read, “Dear Dileep, may all the best blessings shower upon you today and always. Have a great birthday! #GodBlessedBeing.” Aju Varghese, Munna Simon and many others have also wished the actor. Let’s take a look at the posts shared by fans on Twitter.

Happy Birthday to the most popular, most successful Superstar in MTown after the great Big Ms. The one and only Janapriya Nayakan Dileep. ❤#HappyBirthdayDileep pic.twitter.com/JE9VCuMmey

Dileep was last seen in the 2019 film My Santa. The actor some amazing films lined-up. Here’s wishing the superstar of Malayalam Cinema a very happy birthday!

(The above story first appeared on LatestLY on Oct 27, 2020 04:42 PM IST. For more news and updates on politics, world, sports, entertainment and lifestyle, log on to our website latestly.com).