Don is produced under the banners of Lyca Productions and Sivakarthikeyan Productions. Ahead of its theatrical release, here’s looking at some of the key details of this upcoming Tamil film. 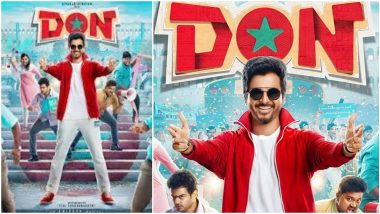 Don will mark the directorial debut of Cibi Chakaravarthi, who has also written the upcoming Tamil film. Sivakarthikeyan was last seen in the film Doctor, which released in October last year, and it had opened to fantastic response from the audience. Movie buffs’ expectations from Don are sky-high. It is one of the most anticipated Tamil movies and one just cannot wait for it to hit the theatres. Don Trailer: Sivakarthikeyan, Priyanka Mohan’s Campus Comedy Looks like a Sure Shot Entertainer (Watch Video).

Don is produced under the banners of Lyca Productions and Sivakarthikeyan Productions. Ahead of its theatrical release, here’s looking at some of the key details of this upcoming Tamil film.

Cast – Don stars Sivakarthikeyan in the lead. The other actors who would be seen in key roles include Priyanka Arul Mohan, SJ Suryah, Samuthirakani and Soori.

Plot – Don is a college drama and the lead actor would be seen essaying the role of a college student who deals with campus politics, friendship, romance and much more.

Watch The Trailer Of Don Below:

Release Date – The Tamil movie Don is all set to be released in theatres on May 13. The film has also been dubbed in Telugu and has been titled as College Don.

Reviews – The reviews for Sivakarthikeyan’s Don are not out yet. As soon as the reviews will be out, LatestLY shall update you all with the same.

(The above story first appeared on LatestLY on May 11, 2022 03:35 PM IST. For more news and updates on politics, world, sports, entertainment and lifestyle, log on to our website latestly.com).