Hero: Teaser of Sivakarthikeyan-Kalyani Priyadarshan Starrer to Be Out Tomorrow, Salman Khan to Launch It

Ace filmmaker Priyadarshan’s daughter Kalyani is all set to make her debut in the Tamil film industry. She is paired opposite Sivakarthikeyan in the upcoming flick Hero. Cinephiles are excited to watch Siva and Kalyani sharing screen space. 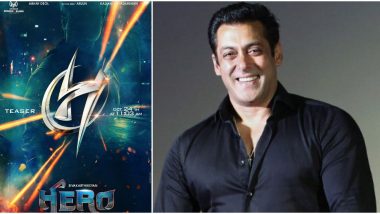 Ace filmmaker Priyadarshan’s daughter Kalyani is all set to make her debut in the Tamil film industry. She is paired opposite Sivakarthikeyan in the upcoming flick Hero. Cinephiles are excited to watch Siva and Kalyani sharing screen space. The latest buzz on this film is about its teaser. The makers of Hero have announced that the film’s teaser will be out on October 24, which is tomorrow, and it would be launched by Bollywood superstar Salman Khan. Sivakarthikeyan – Kalyani Priyadarshan’s #SK15 to Be Called HERO!

Hero is produced under the banner of KJR Studios. While sharing details about the teaser’s release date and team on Twitter, the makers wrote, “Teaser time is here! Set your alarm clocks to 11:03 AM tomorrow! It’s going to be EPIC”. Directed by PS Mithran, this is touted to be a superhero thriller. Hero Second Poster: Sivakarthikeyan As the Masked Man Reminds Us of Salman Khan From Kick (View Pic).

Here’s The Announcement On Hero Teaser

The upcoming movie Hero also stars Arjun Sarja and Abhay Deol in key roles. Not only lead actress Kalyani Priyadarshan but even Abhay would be making his debut in Kollywood with this movie. Filmmaker PS Mithran who made his directorial debut with the hit film Irumbu Thirai, has also penned down the script of Hero. The film’s music will be composed by Yuvan Shankar Raja. Hero is all set to hit the big screens by the end of this year.

Meanwhile, Sivakarthikeyan has also signed the dotted lines for SK16. He is doing a film with director Pandiraj. About it he had tweeted, “Extremely Happy to be associated with @sunpictures and My director who introduced me to the big screen @pandiraj_dir sir #SK16BySunPictures”. On the other hand, Kalyani Priyadarshan has few intriguing projects in her kitty – Vaan, Marakkar: Arabikadalinte Simham and one untitled project with Pranav Mohanlal. Stay tuned for further updates!

(The above story first appeared on LatestLY on Oct 23, 2019 01:53 PM IST. For more news and updates on politics, world, sports, entertainment and lifestyle, log on to our website latestly.com).