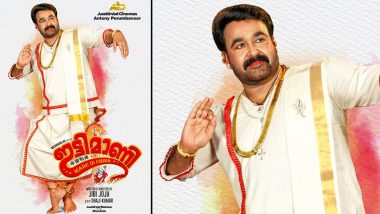 Mohanlal is in top form at the box office, delivering his biggest hit yet with Prithviraj Sukumaran's directorial debut, Lucifer. The Malayalam superstar, who is soon to turn 59 on May 21, has now revealed a surprise gift for his fans with the first look poster of Ittymaani: Made in China. The entertainer is directed by debutants Jibi and Joju. Mohanlal's close friend and associate, Anthony Perumbavoor, who has produced most of Lalettan's recent hits including Lucifer, is once again backing Ittymaani: Made in China. Salman Khan’s Brother Arbaaz Signs His First Malayalam Film With Mohanlal.

Speaking of the first look poster, 'intriguing is the word that comes to my mind. The poster has Mohanlal dressed up in a traditional Thrissur achayathi ensemble. and looks so ready for a dance pose. What's up, Lalettan? What new stuff of entertainment are you going to offer us in this new movie?

Check out the first look poster that Mohanlal had tweeted below:

On April 30, Mohanlal had earlier shared a still from the film, that has him winking at the camera. The scene could have been a tribute to Priya Prakash Varrier's wink from Oru Adaar Love that went viral last year. In the background, we can also see Radhika Sarathkumar praying. All You Need to Know About Mohanlal Starrer Ittymaani Made in China.

Talking more about the film, one of the directors, Jibu had promised in an interview that Ittymaani: Made in China would remind the audience of Mohanlal's evergreen hits like Vellanakalude Naadu, Chithram and Kilukkam. Well, that's what everyone else promises us these days, so let's hope that the directors stick to their promise this time.

(The above story first appeared on LatestLY on May 17, 2019 08:05 PM IST. For more news and updates on politics, world, sports, entertainment and lifestyle, log on to our website latestly.com).

Comments
Tags:
Ittymaani Ittymaani Made In China Ittymaani: Made in China movie Mohanlal
Comments
You might also like