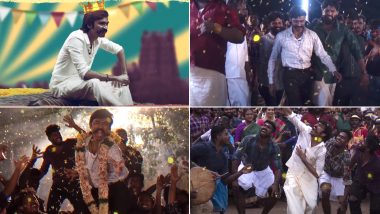 As promised, the makers of Jagame Thandhiram have released the first single titled “Rakita Rakita Rakita” featuring Dhanush, and we must say, it is indeed the perfect treat for all his fans on the occasion of his birthday. The makers had promised that they would be releasing the first track from the film, and here you go. Jagame Thandhiram makers have released the song in both Tamil and Telugu languages and this track composed by Santhosh Narayanan is a mass number. Dhanush to Celebrate His 37th Birthday on July 28! Jagame Thandhiram Makers Announce the Release of the Film’s First Single with a New Poster.

The makers have released the lyric video of “Rakita Rakita Rakita” and it features the various avatars of Dhanush as Suruli in the upcoming action thriller. It will give you glimpses of the actor in a thick moustache, grooving his heart out, sporting a white coloured lungi and matching shirt, and is seen in celebratory mood. This number is crooned by Dhanush, Dhee and Santhosh Narayanan and the lyrics has been penned down by Vivek. Dhanush Starrer Jagame Thandhiram Will Release In Theatres, Confirms Director Karthik Subbaraj!

This upcoming action thriller has been dubbed in Telugu language and is titled as Jagame Tantram. Jagame Thandhiram, written and directed by Karthik Subbaraj, also features Aishwarya Lekshmi and James Cosmo in the lead. Actors Joju George and Kalaiyarasan would be seen in supporting roles. Produced under the banner of Y NOT Studios, the makers are yet to reveal the theatrical release date of Jagame Thandhiram.

(The above story first appeared on LatestLY on Jul 28, 2020 10:01 AM IST. For more news and updates on politics, world, sports, entertainment and lifestyle, log on to our website latestly.com).