Jana Gana Mana ends with a promise of sequel that offers more background into Prithviraj and Suraj's characters, while GM Sundar and Sri Divya should also return, if the movie ever happens. 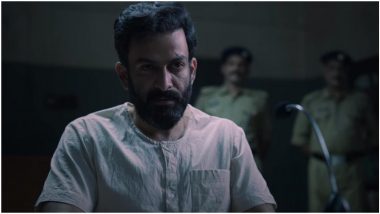 Jana Gana Mana is a Malayalam legal drama, inspired by real-life events, which is directed by Dijo Jose Antony of Queen fame, and is written by Sharis Mohammed. Prithviraj Sukumaran is both the producer and the lead actor, playing the character of lawyer Arvind Swaminathan. He is fighting the case against the police department, after four suspects involved in the alleged rape and murder of a college professor Sabha (Mamta Mohandas) is killed in a fake encounter. Jana Gana Mana Movie Review: Prithviraj Sukumaran, Suraj Venjaramoodu's Film Makes All The Right Noises in a Wobbly, Cramped Screenplay.

Suraj Venjaramoodu plays ACP Sajjan Kumar who was responsible for the fake encounter, who was initially hailed as the hero by the public and the media for his 'swift justice'. However, as the court proceedings move further, Arvind begins to prove that there is more to the case than what meets the eye, and Sabha's death is not just an open and shut matter, but an instance that shows the deep rot in the system.

Before we proceed ahead with what the ending means and how Jana Gana Mana promises a sequel that also could be its prequel, let's warn you the article is filed with SPOILERS.

Arvind proves in court that Sabha was not raped and killed by the four dead suspects, but in fact was murdered by an angry colleague in a road accident, when she threatened to expose his hand in the suicide of a Dalit student. The rape (which wasn't exactly confirmed by post mortem) and the burning of the body was a mastermind plan executed by Sajjan Kumar, who is not as righteous as initially portrayed and was in cahoots with the corrupt Home Minister of State Nageshwara Rao (GM Sundar). They wanted to use her murder as a distraction for the media and the public from the ongoing series of scams the Minister is involved. In fact, if Sajjan hadn't thought it of a simple road accident and had any inkling of the real reason why Sabha was killed, I believe that he wouldn't have needed to go to such lengths of fabrication.

Anyway, the court deems Sajjan Kumar guilty and sentences him to imprisonment. Here's where another twist arrives. We learn that it was Sajjan Kumar who arranged for all the evidence against him to be given to Arvind. He was not happy with the idea of killing four innocents in the fake encounter. However, it was the accident of his son, orchestrated by the Minister to put him under his finger, that triggered Sajjan to expose what happened in Sabha case.

The Mystery of Arvind Swaminathan

The movie doesn't end with this revelation, instead it extends into an epilogue that gives us some background into who Arvind Swaminath is, and how we may get a sequel to Jana Gana Mana.

The opening scene of the movie shows Arvind being sentenced to jail in 2014 for an undisclosed crime, where we also meet his grieving wife, played by Sri Divya. In the finale, we learn more about what really happened there, and glimpses of what happened to Arvind in between. Antakshari Ending Explained: Decoding the Cliffhanger Climax of Saiju Kurup's Investigative Thriller on SonyLIV.

Arvind was an honest IPS officer who was assigned to be ACP of Ramanagara. While investigating a riots case that killed more than 100 people, including women and kids, he finds out that Nageshwara Rao, not a Minister then, is behind it and confronts and slaps him. In retaliation, Rao gets implicated Arvind in some case, which we are not offered privy to, and he is sentenced to jail. In fact it was Sajjan Kumar who had interrogated Arvind in jail. Whether he was working for Rao then, we are not sure. Arvind also loses his wife, which he finds out from the marks on her neck that she was killed, implying that Rao could be behind her death.

What The Sequel Need to Show

If there is a sequel made to Jana Gana Mana, we will need to know how Rao trapped Arvind and got him sent to jail. We also need to know how Arvind became a lawyer once he is out, and when he did get his leg damaged. Was it again Rao's handiwork? The prequel part will also need to show more of the Sajjan Kumar-Arvind interrogation scene, and tell us if Sajjan was also part of implicating Arvind in the fake case, which is why he was so high in the good books of Rao. Bhoothakaalam Ending Explained: Decoding the Dark Climax of Shane Nigam and Revathy’s Film on SonyLIV.

Also remember the extended trailer that showed a scene where Arvind bombed a politician's office, which didn't appear in the movie at all? This could be part of the revenge plan of Arvind against all those involved in destroying his life. He had also promised revenge to Rao on phone in the last scene of the movie.

While Jana Gana Mana 2 is on course to be a revenge saga for Arvind, let's not forget the first movie's real-life inspired political stings. The finale of Jana Gana Mana depicted Sabha's student carrying forward her legacy with Gouri (Vincy Aloshious) ready to contest elections against Rao. Expect more JNU-inspired student-politician clashes in the sequel, if and when that happens.

Prithviraj's Earlier Revelation About the Sequel

During the post-trailer release event, Prithviraj has this to say about Jana Gana Mana being released in two parts and what to expect in the sequel, "We already shot the scenes of the second part separately on another set, the hints of which appear in the first part. So don’t expect the major scenes in the teaser and the trailer to show up in the first part. Those are for the second part." There, he had already warned us!

"However, those flashbacks portions in the trailer are part of the first film. This is the first time I’m listening to a unique marketing design like this. It is completely Dijo and Sharis’ idea.  The layers of my character are revealed only gradually. It’s only when Part 1 ends that you realise that there is more to this man’s story,” he concluded. So yes, there is a sequel waiting to happen, and we are eager to get that announcement soon!

(The above story first appeared on LatestLY on May 04, 2022 04:01 PM IST. For more news and updates on politics, world, sports, entertainment and lifestyle, log on to our website latestly.com).