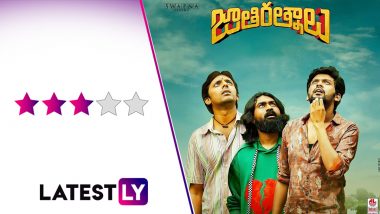 Jathi Ratnalu Movie Review: Jathi Ratnalu, written and directed by Anudeep KV, is about three best friends from Jogipet, who are trouble-makers but not exactly good-for-nothing. There is Srikanth (Naveen Polishetty), who is tired of his nickname 'Ladies Emporium Srikanth, because of his father's hosiery business that he also handles. He wants to go to Hyderabad and seek a job there so that he can escaped from the 'well-mindset' of his village. Srikanth's father (Tanikella Bharani) tries to convince him otherwise, but the stubborn guy won't budge. Adipurush: Nag Ashwin Excited to See Prabhas as Lord Rama in Om Raut’s Film.

His other two friends Ravi (Rahul Ramakrishna) and Sekhar (Priyadarshi) also join him to go to the city. Ravi is a multiple love failure and drowns his 'sorrows' in alcohol. Sekhar, who was born when a rice cooker started whistling, is obsessed with food and cooking rice to perfection.

These three friends find Hyderabad to be not-so-glam, but they somehow manage to stay in a flat in a posh building on a temporary basis. There, Srikanth falls for his pretty neighbour Chitti (Faria Abdullah), much to the chagrin of her father (Sr Naresh). Just when things are going good for the gang, the trio gets implicated in a murder attempt on a politician's (Murali Sharma) life, and they face a future behind the bars, unless they figure out how they got in this mess in the first place.

Jathi Ratnalu is the kind of comedy that makes no sense at all. If you seek for logic in the proceedings, entire thing crumbles on the spot. Even the premise in itself has very little novelty to offer. So why was I enjoying this movie from the start to the finish? For once, the humour works, which is a rarity in some of the comedies that I had the misfortune and sit and bear through in recent times.

A lot of credit goes in how Anudeep has created some very whimsical situations and used certain characters and their mannerisms so well in keeping things engaging. While the first half does a decent job of setting up the heroes' personalities and dilemmas, it is the second half that gets the wheel churning nicely. There are quite a few hilarious sequences that will leave you with a smile on your face. I particularly enjoyed the courtroom sequences, or any scene that Ravi turns wrecker with his drunken love calls. Even the songs are funny, including the romantic ditty "Chitti".

However, not all gags work. There are times where you feels that the jokes are being stretched, even when there is nothing funny to be squeezed out them. This also lengthens the runtime, that deserved to be shorter by half an hour at least. Also I don't really understand the need to have that emotional subplot about India's oldest electronics brand in the film - it hardly adds anything meaningful to the story.  For a movie that should have been a total out-n-out comedy, Jathi Ratnalu should have excised these scenes.

I also need to add here that while I dig Srikanth and Chitti's love story, I was not exactly taken over by how it began in the first place. Slight spoilers here... The only reason that Chitti took a fancy for Srikanth is because he once called her by the pet-name that her dead mother used to call her. But that's also the name that her dad keeps calling her in the public, so why is she so taken when a random person uses that name to hail her? I understand that logic isn't something I should apply to a film like Jathi Ratnalu, yet this plothole is kinda annoying to think about.

These contrivances aside, Jathi Ratnalu is very much entertaining. If Anudeep deserves praise for his light-hearted treatment, then the makers also deserve some praise for the fantastic casting of actors who have a knack to pull off even the silliest of the scenes. Of course, towering above everyone else is the supremely talented Naveen Polishetty, who I now believe was really underused in Chhichhore. I watched with apt amazement to see this performer manage to raise laughs with just slight twitch on his face and his improvisational skills. His confident dialogue delivery, something we are already familiarised with through his AIB skits, is put to good use in the OTT climax. Agent Srinivas Atreya put the seeds for it, but Jathi Ratnalu confirms that a star is truly born! Chhichhore Movie Review: Sushant Singh Rajput, Shraddha Kapoor and Gang Are No ‘Losers’ in This Amusing, Heartwarming Nitesh Tiwari Film.

Priyadarshi and Rahul Ramakrishna also put their comic skills to great use in the film, though their characters get less scope to develop in comparison to Naveen's. Especially, Priyadarshi's Sekhar. Faria Abdullah is someone I felt to be the biggest surprise package of the film. Not only has the director not reduced her role to someone who is merely the object of the hero's fascination, but also she gets enough room to show off her comic chops. I am all in for a spin off movie on her character, which should definitely be named Lawyer Chitti! What say, makers?

Veteran star Brahmanandam is very effective as the judge, however, Venella Kishore's role could have been etched out better. Do not miss out on two big cameos in the film, one of them very random, but still packs a surprise!

- The Rest of the Cast

- Works Well As a Comedy

- The Emotional Sub-Plot Should Be Discarded

- Friends' Characters Could Have Been Developed More

Jathi Ratnalu is unapologetic about throwing the logic out of the window in making you laugh, and as long as we are doing so, that hardly matters at all. With a great cast pulling all stops to raise the hilarity levels, especially Polishetty, you are game for this comic ride even when the jokes don't always work. Jathi Ratnalu is streaming on Amazon Prime Video.

(The above story first appeared on LatestLY on Apr 11, 2021 04:41 AM IST. For more news and updates on politics, world, sports, entertainment and lifestyle, log on to our website latestly.com).