Karthi Birthday Special: 5 Interesting Facts About the Tamil Star You Need to Know

Karthi made his acting debut in 2007 with the romantic drama titled Paruthiveeran. The actor played the titular role in the film, and managed to win everyone's heart with his acting. Karthi’s performance as a careless village ruffian was also lauded by critics. 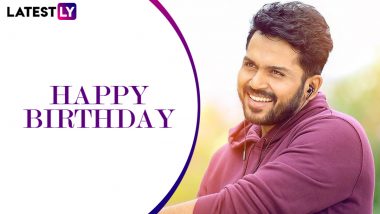 Karthik Sivakumar, fondly known as Karthi, is celebrating his birthday today. He is the younger brother of actor Suriya, and is a household name in the south industry. His fan following is quite huge than one can think of, and his fans are always excited to see the actor on the big screen. His performances have won hearts ever since he made his acting debut, and has always managed to deliver commercially successful box office hits. And this is exactly what makes him a true star. Karthi and Raashii Khanna’s Next Titled Sardar; Motion Poster of the Film Looks Intriguing.

Karthi made his acting debut in 2007 with the romantic drama titled Paruthiveeran. The actor played the titular role in the film, and managed to win everyone's heart with his acting. The film was made in a span of two years and not just the plot was appreciated, but Karthi’s performance as a careless village ruffian was also lauded by critics. While he has been a part of many hit film, the actor also learned filmmaking. He pursued a filmmaking course from the State University of New York and worked as an assistant director for the film Ayitha Ezhuthu. He got to work with one of the best directors in the industry, Mani Ratnam, while working on this film.

But while his career accolades are known to all his fans, there a few interesting facts that no one knows about the actor. Today as the actor is turning 44, we are here to list down a few intriguing trivia about the star. Read Below:

Never Wanted To Be An Actor

Karthi never wanted to be an actor. This was never his first choice and he says that it was his fate that brought the actor in him. He always wanted to be a director.

To learn more about filmmaking, Karthi assisted Mani Ratnam on two films. While we already mention one of the films above, he also worked with him in Yuva. He even appeared as a student in a college scene from the film.

Karthi is a big time Kamal Haasan fan. He grew up watching his film, and also used to admire Ratnam's work. Not just this he was also the classmate of Superstar Mahesh Babu during college.

Apart from his on-screen work, Karthi has been a noted social welfare activist as well. He is often seen helping out the needy and encouraging his fans to do the same. He had also worked as a graphic designer in New York before coming back and joining the industry.

Karthi loves animals. He adopted a one-year old white tiger cub. The name of the cub is Namratha. Karthi Blessed With a Baby Boy, Thanks Doctors and Nurses for the Life-Changing Experience.

Karthi is truly a gem of a person. He is one of the most humble actors in the industry, who is continually working hard to impress his fans. We wish this multi-talented star a very happy birthday.

(The above story first appeared on LatestLY on May 25, 2021 08:10 AM IST. For more news and updates on politics, world, sports, entertainment and lifestyle, log on to our website latestly.com).