Srinidhi Shetty, who celebrates her 28th birthday on October 21, is known for her works in the Kannada and Tamil film industries. 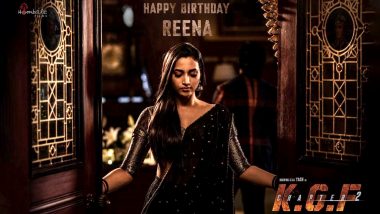 Srinidhi Shetty, who celebrates her 28th birthday on October 21, is known for her works in the Kannada and Tamil film industries. Besides being a wonderful actress, she is the second Indian representative to have won the title of Miss Supranational in 2016. This isn’t the first time that KGF fans would be seeing Srinidhi on the big screen. This beauty had made her acting debut in 2018 with KGF Chapter 1 in which she had played the character Reena Desai. Director Prashanth Neel has shared Srinidhi’s look from KGF Chapter 2 on the occasion of her birthday and that is indeed the best treat for all her fans and all those who are eagerly looking forward to this magnum opus. Srinidhi Shetty Birthday Special: A Look at her Oh-So-Stunning Style File (View Pics).

Srinidhi Shetty would be reprising her role in KGF Chapter 2 as Reena Desai. In this poster shared by the team, the actress is seen in a chic, traditional avatar. Dressed in a black ensemble, Srinidhi as Reena is looking bold and beautiful. The makers captioned this poster as, “Can Love and Brutality Coexist.....? Wishing our Reena, @SrinidhiShetty7 a very Happy Birthday. #HBDSrinidhiShetty #KGFChapter2.” Vikram 58: KGF Actress Srinidhi Shetty Roped In to Star Opposite Chiyaan Vikram in This Tamil Film.

It was recently when Srinidhi Shetty had shared a selfie with Prashanth Neel. She was heading to Mangaluru for the final schedule of KGF Chapter 2. The upcoming film, produced under the banner of Hombale Films, stars Yash as Rocky and Sanjay Dutt as Adheera in the lead. KGF Chapter 2 is expected to hit the big screens by mid-January 2021.

(The above story first appeared on LatestLY on Oct 21, 2020 10:51 AM IST. For more news and updates on politics, world, sports, entertainment and lifestyle, log on to our website latestly.com).