Malayalam Actress Miya George and Ashwin Philip to Get Married in September?

Miya George is predominantly known for her works in the Malayalam film industry. As per latest reports, Miya would be tying the knot with businessman Ashwin Philip in September. 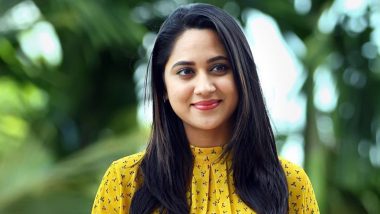 Miya George is predominantly known for her works in the Malayalam film industry. She made her acting debut in 2010 with the Malayalam film titled Oru Small Family. But it was two years later when she bagged her first lead role with the film Chettayees, which also featured Lal, Biju Menon, Suresh Krishna in the lead. Now as per latest reports, Miya George would be tying the knot with businessman Ashwin Philip in September. Malayalam Actor Gokulan Marries Girlfriend Dhanya During the Lockdown; Jayasuriya, Tovino Thomas Congratulate the Couple.

Owing to lockdown, there are many celebs who had to postpone their summer wedding plans. But there were some who managed to get hitched as per the set wedding date and kept it as a low-key affair with just family members in attendance. According to leading media reports, Miya George recently got engaged to Ashwin Philip and it was a low-key affair that was held at the latter’s residence with just the couple’s family members in attendance. Miya and Ashwin had plans to host a grand engagement ceremony in Kottayam, Kerala. But plans had to be changed due to the lockdown imposed owing to the coronavirus outbreak. Malayalam Actor Chemban Vinod Jose and Mariam Thomas Tie the Knot amid Coronavirus Lockdown (View Pics).

As per a report in India Today, Miya George and Ashwin Philip are planning to tie the knot in September. If everything gets resolved by then, it would be a grand affair that will also include the actress’ industry pals. Miya is yet to make an official announcement about her engagement and wedding ceremonies. On the work front, Miya George was last seen in Al Mallu, directed by Boban Samuel. Stay tuned for further updates from the world of entertainment.

(The above story first appeared on LatestLY on Jun 02, 2020 12:30 PM IST. For more news and updates on politics, world, sports, entertainment and lifestyle, log on to our website latestly.com).