Considering that cinemas in many states are opened with only 50 per cent occupancy, we think Thalapathy Vijay and Vijay Sethupathi is doing fairly well for itself. 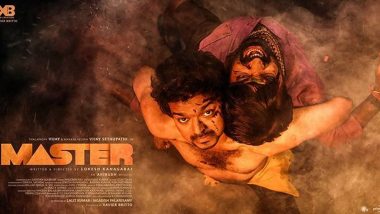 Lokesh Kanagaraj's Master, in an iconic move, was one of the first films to reach the cinemas after the lockdown. The film which stars Thalapathy Vijay and Vijay Sethupathi is currently roaring at the box office. The film opened with a massive crowd coming in to watch their favourite stars on the big screen and helped the team rake in a huge amount of money for the film's business. The film managed to pool in Rs 40 crores in Tamil Nadu alone in two days of the release and now has even entered the 100 crore club within a week. Master Box Office Collection Day 3: Thalapathy Vijay and Vijay Sethupathi’s Film Grosses Over Rs 50 Crore in Tamil Nadu Alone!

The new box office numbers suggest that the film has collected Rs 125 crore at the box office in mere 5 days. Master is said to have collected 81 crores in Tamil Nadu, Rs 20 crore in other Telegu states, Rs 14 crore in Karnataka and Rs 7.5 crore in Kerala. They also raked in an extra Rs 2.5 crore in other states of India. Considering that cinemas in many states are opened with only 50 per cent occupancy, we think Thalapathy Vijay and Vijay Sethupathi is doing fairly well for itself. Master had grossed over Rs 50 crore in Tamil Nadu alone within the first three days and is all set to be remade in Hindi.

Apart from this, Chennai Police earlier has booked a theatre for sneering the social distancing rules at the screening of Master. As per the government rule, only 50% occupancy is allowed in the theatres, but the management of the said theatres reportedly allowed more people to enter their premises. As per reports in The News Minute, the theatre was booked under Sections 188 and 269 of the Indian Penal Code (IPC). Master Box Office Collection Day 2: Vijay and Vijay Sethupathi’s Film Roars at the Ticket Window, Surpasses Rs 40 Crore in TN!

Helmed by Lokesh Kanagaraj, the film also features Malavika Mohanan, Arjun Das, Andrea Jeremiah and Shanthanu Bhagyaraj in pivotal roles. The film did not impress the Hindi-speaking audience, so the question that now is being raised is if the Hindi remake will work in favour of makers or not. The casting for the film will begin soon as well and we cannot wait to see how it will turn out to be.

(The above story first appeared on LatestLY on Jan 18, 2021 04:16 PM IST. For more news and updates on politics, world, sports, entertainment and lifestyle, log on to our website latestly.com).