Vishnu looks impressive as usual and Kajal is stealing the limelight with her beauty. The camaraderie between the two is scintillating and fresh. Suniel Shetty also looks impressive. 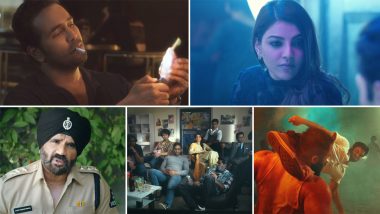 It finally feels like filmmakers are back in action. Every day we get to see trailers, release date announcements of different films and now joining the bandwagon is Vishnu Manchu, Kajal Aggarwal, Suniel Shetty's film titled Mosagulla. The makers have been sharing updates about the film for quite some time and after introducing us to the characters of the film, they are all set to pique the audience's excitement with the trailer of the film. The makers have finally unveiled the first glimpse of what the movie will look like and we have to say that you are in for a ride. Mosagallu Trailer: Vishnu Manchu, Kajal Aggarwal, Suniel Shetty Are All Set to Engage You in a Gripping Story.

Money laundering, scams and tempestuous people chasing money combined in a story always works and the makers of Mosagulla are giving us just the taste of it. The two-minute-long trailer shows how Vishnu's character and Kajal Aggarwal's character plan out the biggest scam possible. They would reportedly be seen playing the role of siblings They both love money and earn to an extent that they are not able to keep a track of it. While they enjoy the success, Suniel Shetty, who essays the role of an ACP, discovers the scam and is not after them. The chase makes it a gripping story and we get to see a sneak peek of the drama in the trailer.

Vishnu looks impressive as usual and Kajal is stealing the limelight with her beauty. The camaraderie between the two is scintillating and fresh. Suniel Shetty also looks impressive and seeing him on the screen after this long feels good. The makers have cut the trailer quite smartly where you do understand what is going on but are left wanting for more. the background score is majestic as well. Mosagallu: Suniel Shetty’s First Look As ACP Kumar Looks Badass in This Vishnu Manchu and Kajal Aggarwal’s Crime Thriller.

This film also stars Ruhi Singh, Naveen Chandra and Navdeep in key roles. The film is directed by Jeffrey Gee Chin and Sheldon Chau will be handling the cinematography. Mosagallu, produced by under the banners of AVA Entertainment and 24 Frames Factory, was slated to release on June 5. However, the makers had to postpone the release date owing to the coronavirus pandemic. The new release date is yet to be announced.

(The above story first appeared on LatestLY on Feb 25, 2021 05:14 PM IST. For more news and updates on politics, world, sports, entertainment and lifestyle, log on to our website latestly.com).