Narappa is the official Telugu remake of the 2019 acclaimed Tamil hit, Asuran and is directed by Srikanth Addala. The movie stars Daggubati Venkatesh in the lead, along with Priyamani, Karthik Rathnam, Rao Ramesh, Rajeev Kanakala and Nassar in the cast. Narappa is streaming on Amazon Prime Video. 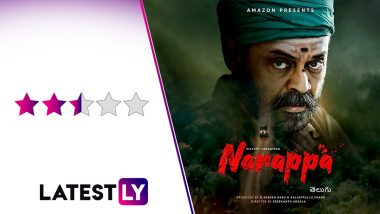 Narappa Movie Review: Narappa is the official Telugu remake of the 2019 acclaimed Tamil hit, Asuran. The original starred Dhanush and Manju Warrier in the lead, and was directed by Vetrimaaran. The remake is made by Srikanth Addala of Brahmotsavam fame, and has Daggubati Venkatesh in the lead, along with Priya Mani, Karthik Rathnam, Rao Ramesh, Rajeev Kanakala and Nassar in the cast. Shyam K Naidu is the cinematographer, Marthand K. Venkatesh is editor while Mani Sharma has scored the music. OTT Releases of the Week: Shilpa Shetty Kundra’s Hungama 2; Vikrant Massey’s 14 Phere on ZEE5; Ventakesh’s Narappa on Amazon Prime Video and More.

Asuran is a pretty recent film, available on the same platform where Narappa has gone for a direct OTT release (Amazon Prime Video). Now some sections of our cinema has an unfortunate habit at looking at other sections of our cinema and, seeing which film has worked there, and opts for its remake. Mohanlal's Drishyam 2 is already being marked for multiple remakes, including a Telugu one also starring Venkatesh. So Bollywood, you do have company when it comes to rehashes!

On the face of it, I understand how Asuran makes for a viable remake idea for the Narappa makers. It has one of Telugu mainstream cinema's favourite formula - a revenge drama where a gentle hero is brought to a breaking point, and then we find out that he has a violent past. Also, yeah, a lot of bloodshed and beheadings occur throughout the film.

To give credit where due, Srikanth Addala makes a very faithful remake of the original, almost frame to frame adaptation. Here comes the problem, though. The writer of this piece is one of the fortunate many to have seen Asuran and was blown away by it, so Narappa comes with the unfortunate, but expected invitation of comparison. That's where the film goes down for me.

The plot is basically the same. Narappa (Venkatesh), his wife Sundaramma (Priyamani), his two sons and a small daughter, along with his brother-in-law Basavayya (Rajeev Kanakala), live in a village where they are always in clash over their land with the higher-class Pandusamy (Naren) and his brash sons. Compared to his family members, Narappa is much more passive and pacifist, and seeks to bow in front of the people who want to usurp his land, much to the consternation of his hot-headed older son Munikanna (Karthik Rathnam).

A brawl between Pandusamy's son and Sundaramma leads to former pushing the latter, which incites Munikanna. Things gets escalated quickly, and in an act of brutality, Munikanna is violently killed and his headless body is left in a field.

Oh yeah, Munnikanna's younger brother is there, who I felt is now more irritating in the remake, perhaps having to seeing twice how his stupidities cause double trouble for his family. I mean, he is so dumb that he doesn't run when a wild boar charges at him. Of course, his father's abusive behaviour could be a reason for him being so obstinate (he keeps doing the exact opposite things that Narappa tells him not to and thus bringing more trouble) and idiotic. I was kinda glad when the lad was slapped by one of the villains, during the intermission fight scene that marks the first mass moment for its protagonist.

Anyway this brother then seeks vengeance, thus forcing Narappa and his family to go on the run. And it is during the run that both the surviving son and the audience learns why Narappa is acting so pacifist.

Asuran is a highlight of Dhanush's career, and is one of the most hard-hitting mainstream films to come out of Kollywood in recent times. Basically a revenge saga, the movie highlights the caste politics and the suppression of lower castes to the point of a violent retaliation. Asuran's Sivasaami was a role tailor-made for Dhanush who went on to earn a National Award for his performance in the film. There was also the great Malayalam actress Manju Warrier making a mind-blowing Tamil debut, playing his wife, and often getting to steal the show from him.

Like I mentioned before, Narappa doesn't bring any cosmetic changes to the original film, as it retains the class-conflict, the violent nature and the characterisation intact. And yet, the fierceness that Vetrimaaran brought to Asuran seems lacking in Narappa. It keeps on reminding us that this is a remake that roped in to suit a superstar's purpose. Narappa: Venkatesh Daggubati, Priyamani Starrer to Hit the Screens on THIS Day.

Look, I know what you are thinking. Dhanush is a superstar too. But he has this incredible quality of pushing those starry airs aside and gelling well into any role, not to mention the chameleonic ability to play any age, be it a teenager or a quadragenarian. Venkatesh is a fine actor, and so is Priya Mani who is a National Award winner.

Coming to think of it, Venkatesh's role in the film is kind of a progression of what he did in Chanti way back in 1992 (remade as Anari in Hindi, also remake of Tamil film Chinna Thambi... sigh!). Yet, I couldn't find him very believable in the lead role, though the aggressiveness that he brought in the action scenes and the gentleness in the emotional scenes have to be noted. At the same time, he couldn't bring the same kind of agility that Dhanush possesses, and he can thank the slo-mo techniques that it doesn't get very noticed.

While Venkatesh as the older Narappa could still come across as convincing, I wish I could say the same in his younger version, that comes across more dashing than needed. Also when paired with a much younger Ammu Abhirami in the flashback portions, gets to feel more awkward.

What saves the film, though, is Addala's decent making and the BG score - loved that thumping instrumental used during the boar hunting sequence in the first act. Karthik Rathnam leaves an impression in his brief role, while the supporting cast is good enough.

- The Blunt Fierceness and The Societal Commentary Feels Underwhelming Here

Maybe... maybe, I would have ended up admiring Narappa, if I never get to have watched Asuran and what Dhanush and Manju brought into those roles. It helps less when Asuran comes as one of the suggestions on the platform where Narappa is streaming, which is happening on Amazon Prime Video.

(The above story first appeared on LatestLY on Jul 20, 2021 12:01 AM IST. For more news and updates on politics, world, sports, entertainment and lifestyle, log on to our website latestly.com).