Nayanthara’s Picture with Co-Star Kunchacko Boban and Family from the Sets of Nizhal Is Too Cute to Miss!

Kunchacko Boban and Nayanthara have teamed up for the Malayalam thriller Nizhal. Directed by award winning editor Appu Bhattathiri, the shooting of the film recently went on floors. 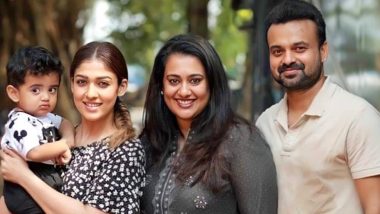 Kunchacko Boban and Nayanthara have teamed up for the Malayalam thriller Nizhal. Directed by award winning editor Appu Bhattathiri, the shooting of the film recently went on floors. The makers even released the lead actors’ look on their occasion of their birthdays. And now the latest picture that is doing rounds on social media is of Nayanthara posing with her co-star’s family on the film’s set. Nizhal Poster: Nayanthara Looks Radiant In Her Mollywood Film Opposite Kunchacko Boban (View Post).

Nayanthara can be seen holding Kunchacko Boban and his Priya’s son Izahaak in her arms. The photo is just too cute to be missed! Nayanthara even celebrated her birthday (November 18) with the cast and crew of Nizhal in Kochi, where the shooting is currently happening. Mollywood lovers are thrilled to see the Lady Superstar’s return in the industry and that too with such an intriguing film. Nizhal First Look Poster: Makers Introduce Kunchacko Boban’s Character Mr John Baby On The Occasion Of His Birthday!

Nayanthara With Kunchacko Boban And Family

The script of Nizhal has been penned by debutant S Sanjeev. About the film Kunchacko Boban earlier told TOI, “Even though it’s a thriller, we believe this movie delves into a hitherto unexplored terrain. After Anjaam Pathiraa, it’s a movie in this genre that really got me excited.” The film is expected to be released in 2021; the exact date is yet to be shared.

(The above story first appeared on LatestLY on Nov 24, 2020 02:38 PM IST. For more news and updates on politics, world, sports, entertainment and lifestyle, log on to our website latestly.com).