Nayattu Movie Review: Kunchacko Boban, Joju George and Nimisha Sajayan Star in One of the Best Cop Thrillers in Recent Times, if Not the BEST! (LatestLY Exclusive)

Nayatu is a political cop thriller directed by Martin Prakkat and written by Shahi Kabir. The movie stars Kunchacko Boban, Joju George and Nimisha Sajayan in the main roles. Nayattu, released in theatres on April 8, is now streaming on Netflix. 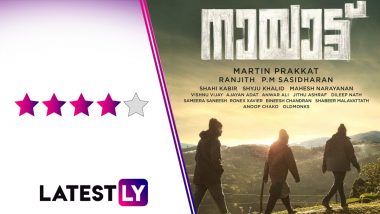 Nayattu Movie Review: In a couple of days' time, you would be watching Salman Khan's latest film, Radhe: Your Most Wanted Bhai, that proudly hails its protagonist - a roguish cop - for the amount of encounters he has carried out. Sooryavanshi, another cop movie delayed due to COVID-19, was also about glorifying the cops, if the trailers and the posters were any hint. But do our cops really have such dauntless, fearless lives? Can they always talk back to the 'system' - media's new fave word for the government - as shown in these films? Here's where Martin Prakkat's new film Nayattu takes a curve out of the usual path and does a fantastic job of playing out the very same system's apathy towards police personnel. One Movie Review: Mammootty’s Political Thriller Loses an Important Discussion in Its Slo-Mo Idol Gazing.

Praveen Michael (Kunchacko Boban) joins a new police station as a driver on duty, where he meets ASI Maniyan (Joju George) and CPO Sunitha (Nimisha Sajayan). Maniyan, his senior of 20 years in experience, who has also worked with Praveen's deceased father, is very protective of his daughter. Sunitha, with whom Praveen seems to develop some sort of soft corner, has her own family troubles in form of a haranguing cousin.

Nayattu first lulls you into thinking that it is safely perched in the territory of Action Hero Biju (which also stars Joju George) and Thondimuthalum Driksakshiyum in terms of workings of a police station. It also sends out feelers of a subtle love story developing between Praveen and Sunitha using some coy glances and unspoken gestures.

But before you know it, there is an immense rug-pull as Martin Prakkat puts the viewers straight into a thriller territory. A clash with a group of Dalit hooligans and later followed up by an unfortunate incident that sees Praveen, Maniyan and Sunitha on the run. The very system who they tried to upheld by hook or crook is now chasing after them for a crime they never committed, all because elections are happening, and the government needs a scapegoat.

Nayattu, which means 'The Hunt', is Martin Prakkat's first film in six years after 2015's Charlie. I can't help but be in awe of the stark contrast between both the films here. Gone is the bohemian charm and optimism of Charlie, replaced here by a woeful cynicism that refuses to pave way for hopefulness. Not for a single minute does Nayattu allows you a chance into escapism, even though this is a movie about three persons escaping from getting punished for something they didn't do.

The Dalit politics that the film gets into can be deemed controversial, but Nayattu, written by Shahi Kabir, uses the factor to expose how it plays into appeasement politics for vote-bank. It can be deemed as a twisted irony that one of the fugitive cops - Maniyan - is also a Dalit, that is unfortunately lost over the police uniform that has now stopped being his kavach kundal. Truth would hardly matter when elections are to be won; when power can easily turn an innocent into a culprit. It isn't just about the main trio.

Earlier in the film, Maniyan falsely implicated a young man for arson and attempted murder, because the latter had gone to visit his girlfriend late in the night, who happens to be the relative of a VIP.  Maniyan, who is already controlled by strong paternal protective urges, in reply to a questioning look from Praveen, says that at least goondas who kill on contract have the option not to take it up. The police, unfortunately always at the mercy of the politicians, can never have that say. Irul Movie Review: Fahadh Faasil and Darshana Rajendran’s Fantastic Performances Stand Out in This Edgy Thriller.

Later in the film, another police officer, played by the late Anil Nedumangad, reminds his lady superior of how an IPS officer tried to expose the system and is now languishing in jail for two years. For the uninitiated, this could be a callback to the incarcerated real-life former cop Sanjiv Bhatt who is in prison, after he tried to implicate the Narendra Modi government in the Godhra riots. Nayattu reminds you, like many other films before, that you cannot have a clean law & order system, when that very system is at the mercy of the opportunistic politicians, that also applies to the public service as well. Maybe one of the last frames of a blind woman casting her vote could be an allegory of the political dilemma this whole country is right now.

Leaving political allegories aside for a moment, once in the chase territory, Nayattu continues to throw one subversive twist after another, in its relentless cat-n-mouse game. And yet for a film that is continually putting its protagonists at peril, Nayattu pauses for a moment here and there, to let a father grieve over the fact he could be never with his daughter over the important moments of her life. Or Praveen buying a sanitary pad for Sunitha, even though she hides from them about her periods. It is these scenes that develop the characters beautifully enough, that we duly care for their eventual final fates in the film.

Speaking of which, the climax is definitely a blow in the gut, which I wouldn't want to elaborate more here. While I had expected the outcome of the trio's saga to not exactly turn massy, the turn of events that lead to that outcome left me shocked.

As far as I can remember there are only two songs in the film, but the first track "Appalaale", composed by  Vishnu Vijay. played during a pre-wedding scene party, left me stunned with its cheerful demeanor while its lyrics speak of some very violent and disturbing acts. Perhaps,reflecting our own attitude of living in a crime-infested society and being okay about it.

Shyju Khalid continues to deliver his splending work with the camera, with some great track and overhead shots, managing to put even the beautiful locales of Munnar into a pall of gloom to match the mood. As for the performances, all actors are splendid in the role, especially the three leads. Kunchako Boban and Nimisha Sajayan deliver the required goods needed to feel for their characters, but it is the incredibly in-form Joju George who leaves the maximum impact as the bulky cop, who takes his department's betrayal to his heart the most. One slight issue I have with the characters is that save for her final stand, Nimisha's Sunitha is mostly a silent spectator to the tensions of her two male companions. Special mention must also be given to Jaffer Idukki for his portrayal of the shrewd Chief Minister, whose eye is always on the vote-bank and keeping his people safe.

- Can Be Seen as Taking an Anti-Dalit Stance

If by the end of Nayattu, you are left with sense of despair and hopelessness, that means Martin Prakkat has achieved what he has set out for. But despite that sense of angst, Nayattu works exactly for being that realistic cop thriller that you need to check out amidst the barrage of glam cop dramas that awaits you in the days ahead. Nayattu, released in theatres on April 8, is now streaming on Netflix.

(The above story first appeared on LatestLY on May 10, 2021 02:21 PM IST. For more news and updates on politics, world, sports, entertainment and lifestyle, log on to our website latestly.com).