Popular Malayalam actor Nedumudi Venu, who was admitted to a private hospital here, whose condition was serious, passed away, said doctors treating him. The 73-year-old actor, who has acted in more than 500 films, had earlier recovered from Covid-19 infection. 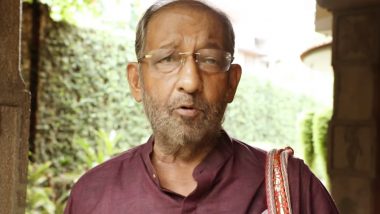 Thiruvananthapuram, October 11: Popular Malayalam actor Nedumudi Venu, who was admitted to a private hospital here, whose condition was serious, passed away, said doctors treating him. The 73-year-old actor, who has acted in more than 500 films, had earlier recovered from Covid-19 infection. For the past few days Venu was admitted in the hospital and was in the intensive care unit, where he breathed his last on Monday afternoon.

Starting his career as a journalist, he has had no reason to look back after donning the grease paint for the first time in 1978, until then he was a popular theatre personality. Winner of three National Film awards and six state film awards, Venu was immensely popular not just among his fans but also his colleagues in the film industry due to his pleasing and jovial nature. Nedumudi Venu Dies at 73: Popular Malayalam Actor Dies at Private Hospital in Thiruvananthapuram.

Reacting to the tragic news, hugely popular comedian and character actor, also a former Lok Sabha member Innocent said words cannot describe what he is passing through after hearing the sad news.

"I began my career in the film industry as a producer and in the eighties when I produced my film 'Vidapareyum Mumbe', when we decided to chart him, it was the first time I saw him and in the subsequent four films also he was there. We had a long lasting friendship, where our families also were involved," said Innocent.

"I always felt, one day Nedumudi would be saying condolences when I pass away, but I never ever felt, I would have to say this about him. It's really painstaking for me as I have lost a very good friend," added Innocent.

Innocent is a cancer patient and has recovered from the disease and currently undergoes checkups. Condolences have started to pour in and another popular actor Jagdish said he has known him from his second film and their friendship has blossomed hugely.

"Nedumudi was an institution in himself and knew every aspect of art culture and films. Malayalam films have lost one of its biggest personality," said Jagdish. A multi faceted personality he was also an accomplished player of mridangam and tabla and when he was on shooting sets there was never a dull moment.

Another actor Raju said, he had just returned from a film where he acted alongside Mammootty and a few days back even we spoke. Actor Jayaram who has acted in numerous films recalled by saying that I spoke to his son just a few hours back and he said he was keeping well.

"An immensely talented actor was he and I have heard many directors from other southern states that how they wished if they had one actor like Venuchettan. His space will never be filled again," said Jayaram.

His hugely popular films include 'His Highness Abdullah, Bharatham, Thenmavin Kombathu' and whenever he joined hands with superstar Mohanlal, the success of the film at the box office was a foregone conclusion. He is survived by his wife and two sons. Details of his funeral is being decided and it remains to be seen if it would be held here or at his home town in Nedumudi in Alappuzha district.

(The above story first appeared on LatestLY on Oct 11, 2021 05:50 PM IST. For more news and updates on politics, world, sports, entertainment and lifestyle, log on to our website latestly.com).