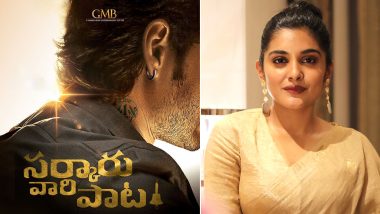 Sarkaru Vaari Paata is the upcoming Telugu film in which Mahesh Babu would be playing the lead role. An official announcement on Keerthy Suresh playing the lead actress is yet awaited. This movie is directed by Parasuram of Geetha Govindham fame. Now the latest buzz is, actress Nivetha Thomas has been roped in for this upcoming project to play a key role. Nivetha who started her career as a child artist has done numerous films in Malayalam, Tamil and Telugu as well. She is best known for her performance in the films Ninnu Kori, Gentleman and Darbar. Sarkaru Vaari Paata: Here’s What Mahesh Babu Has to Say about the Release of His Upcoming Telugu Film!

According to a report in the Deccan Herald, Sarkaru Vaari Paata will be a two heroine film and Nivetha Thomas is reportedly being considered to play the second lead actress. As per a report in India Today, director Parasuram had approached Nivetha to narrate the script and she is reportedly impressed about her role in this upcoming film. Neither the makers nor Nivetha have made any official announcement on this yet. Sarkaru Vaari Paata: Keerthy Suresh Answers the Million-Dollar Question, Confirms Signing Mahesh Babu's Next.

Sarkaru Vaari Paata is touted to be a masala entertainer, loaded with action-packed drama. The shooting of this Telugu film is expected to go on floors by the end of this year. This film is bankrolled by GMB Entertainment, Mythri Movie Makers and 14 Reels Plus.

(The above story first appeared on LatestLY on Jul 01, 2020 09:37 AM IST. For more news and updates on politics, world, sports, entertainment and lifestyle, log on to our website latestly.com).