Prabhu, son of veteran actor Sivaji Ganesan, is known for his works in Tamil Cinema. It was in the year 1982 when he had made his acting debut. 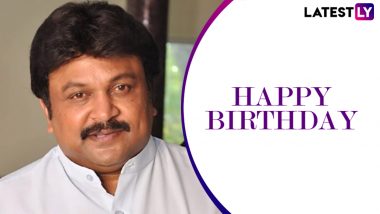 Prabhu, son of veteran actor Sivaji Ganesan, is known for his works in Tamil Cinema. It was in the year 1982 when he had made his acting debut and he has been roped in to play lead and supporting roles. Prabhu, who is celebrating his 64th birthday today, has featured in more than 200 films. Even today he is one of the most loved and highly respected actors of Tamil Cinema. Fans Remember Sivaji Ganesan On His Death Anniversary, Share Memorable Pics Of South Cinema’s Legend On Twitter.

Prabhu has also featured in Malayalam, Kannada and Telugu films. With the release of the film Tharaasu, he got the title of Ilaiya Thilagam. On the occasion of his birthday, let’s take a look at some of his best roles that fans and critics loved the most.

Chinna Thambi – Prabhu shot to fame for his role in this romantic drama. He played the role of a naive lad, a who doesn’t go to school but believes in entertaining his villagers.

Kozhi Koovuthu – It is his first commercially successful venture. Directed by Gangai Amaran, he played the character Velusamy. This film was a sleeper hit that had more than 100 days run at the box office.

Guru Sishyan – This was also a commercially hit film directed SP Muthuraman in which Prabhu shared screen space with Rajinikanth. The two actors played the role of convicts Babu and Raja, respectively.

En Thangachi Padichava – Helmed by Vasu, Prabhu played the role of Periasamy, an orphan, who returns to his village after spending five years in jail for a murder.

Kaalapani – He played the role of a Tamilian revolutionary, named Mukundan Iyengar, who was jailed for committing terrorist activities in Calcutta. He tries to escape from prison numerous times but never succeeds.

Here’s wishing the iconic actor of Tamil Cinema, Prabhu, a very happy birthday and a wonderful year ahead!

(The above story first appeared on LatestLY on Dec 31, 2020 08:12 AM IST. For more news and updates on politics, world, sports, entertainment and lifestyle, log on to our website latestly.com).