Rakshit Shetty Birthday Special: 4 Books We Found on the Actor's Instagram Profile That Prove He Is a True Blue Bibliophile

Apart from the world of cinema, Rakshit Shetty is also an avid lover of reading. He often takes it to social media to share pictures of the books that he is reading. 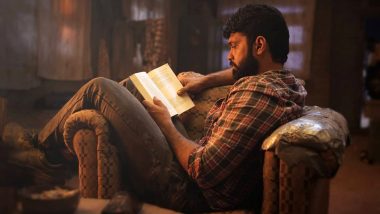 Rakshit Shetty is a multi-talented artist. Not only do people love his acting in films, but he is also one of the most popular filmmakers in the Kannada film industry. While he has many successful films in his kitty, the actor was not really planning on getting into the entertainment industry initially. Before stepping into the world of cinema, Shetty worked as a software professional for two years, and then finally decided to give it a shot. He became a bankable name in no time and earned a lot of recognition and numerous awards for his impressive performances. Rakshit Shetty Is Writing Punyakoti During Lockdown, Says 'It's Not as Simple as the Stuff I Wrote When I Was an Amateur'.

His film, Kirik Party, alongside Rashmika Mandanna in the lead, became one of the highest-grossing Kannada films of all time when it released. The actor essayed the role of the male lead in the film and also produced and co-wrote the script of the film along with a team The Seven Odds. This blockbuster was later remade in Telugu as Kirrak Party. He also has hit films like Simple Agi Ondh Love Story, Ulidavaru Kandanthe, Vaastu Prakaara, Godhi Banna Sadharana Mykattu to his credit.

Apart from the world of cinema, Rakshit Shetty is also an avid lover of reading. He often takes it to social media to share pictures of the books that he is reading. The actor turns 38 today and on the occasion of his birthday, let’s take a look at 4 book posts on his Instagram profile that prove he is a true bibliophile.

The Order of Time by Carlo Rovelli

This seems like quite an intriguing book that Rakshit had been reading. Wikipedia state, "The Order of Time is a book by Italian physicist Carlo Rovelli. It is about time in physics. Carlo Rovelli is the leading scientist who writes about "warped time" and at the forefront of physicists who are trying to unify the theory of relativity and loop quantum gravity."

This book was gifted to Rakshit by his little nephew. The book is "a study of the European discovery of India's ancient past. Two hundred years ago, India was seen as a place with little history and less culture. Today it is revered for a notable prehistory, a magnificent classical age and a cultural tradition unique in both character and continuity."

A cup of coffee, a serene view and a nice book - this defines true bliss. Rakshit was reading this book in which "drawing from the latest research on neuroscience, artificial intelligence and biometrics, Chopra offers a practical 31-day guide to help us ‘wake up’ at the deepest level in order to liberate ourselves from the conditioning and constructs that underlie anxiety, tension and ego driven demands. Only then does your infinite potential become your personal reality," says its description.

The Great Philosophers: The Lives and Ideas of History's Greatest Thinkers by Stephen Law

This is another interesting book that Rakshit was reading. Google Books describes the book as, "In The Great Philosophers, bestselling author Stephen Law condenses and deciphers their fundamental ideas. Avoiding the technical jargon and complex logic associated with most books on philosophy, Law brings the thoughts of these great thinkers, from Confucius and Buddha to Wittgenstein and Sartre, to life." 777 Charlie: Prithviraj Sukumaran Announces That This Rakshit Shetty-Starrer Will Be Presented by His Production House in Malayalam!

Rakshit Shetty sure has an amazing choice when it comes to reading. We hope to kee getting more and more suggestions from him through Instagram. Here’s wishing the multi-talented star of Kannada Cinema a wonderful year ahead. Happy Birthday, Rakshit Shetty!

(The above story first appeared on LatestLY on Jun 06, 2021 08:10 AM IST. For more news and updates on politics, world, sports, entertainment and lifestyle, log on to our website latestly.com).